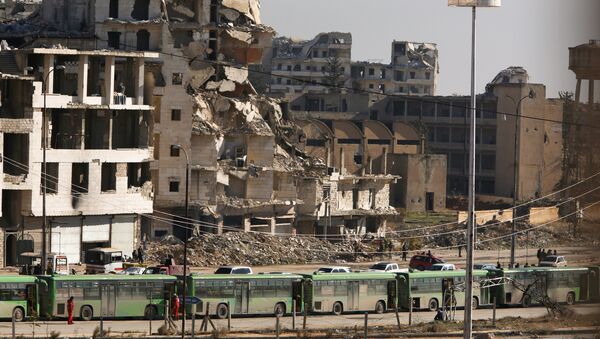 Aleppo is heavily destroyed as a result of the fighting between the government troops and militant groups and it will take some time to assess damages, Governor of the Aleppo province Hussein Diab told Sputnik in an interview.

Liberated Aleppo Offers Syrian Army 'Keys to the North'
ALEPPO (Sputnik) – He added that authorities were trying to eliminate the damages caused by activities of militant groups.

"The damages are terrible, it will take more time to assess the material damage but special commissions have already started to work on that," Diab said.

"The city is gradually returning to normal life," Diab noted.

Bringing the residents back into Syria's Aleppo is one of the main challenges for the administration of the province, Hussein Diab said.

"Aleppo Province is facing a new challenge due to resettlement of the people in eastern areas. It’s an additional burden on the city that lives at the edge after three-years-long blockade. It is vital that the people return to their houses in the liberated areas as soon as possible," the governor said.

Aleppo's Liberation is a 'Major Breakthrough' Offering Hope for Peace in Syria
He noted that before the war the population of the city was about 3 million people. "Despite the fact that there is no precise statistics because of the current situation, according to our data there are currently more than 2 million people living in the city. We are hoping that the rest will come back to take part in rebuilding Aleppo and making it even better than it was before," Diab said.

However, Diab noted the lack of construction equipment as a lot of it has been lost due to the terrorists’ actions.

Diab also said that many people have already returned to their houses after the necessary repair works have been performed.

"We will make all efforts to meet requirements of all the people of Aleppo. Since the operation to free the city started we have accepted about 100,000 people from the eastern districts. We placed 79,000 of them in temporary accommodation centers prepared by the administration, and the rest went to live with their relatives," he explained.

On December 16, the Russian Defense Ministry announced that Aleppo, previously split into the government-held western part and the eastern one controlled by militants, was under full government control with the Syrian army's operation to liberate the eastern part of the city completed.