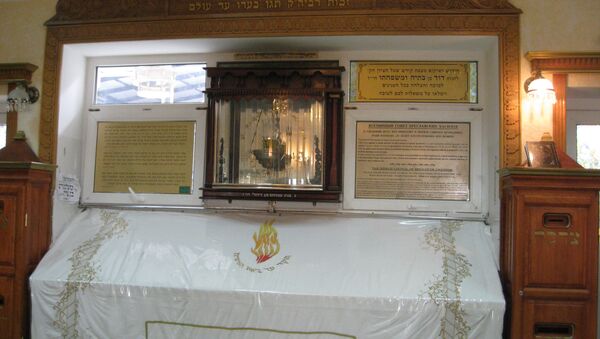 © Wikipedia / Public Domain
Subscribe
The tomb of Rabbi Nachman of Breslov, in Uman, Ukraine, was reportedly defaced with fake blood, and a pig’s head with a swastika carved onto it on Tuesday evening, December 20. The assailants, identified as neo-Nazis by a rabbi at the synagogue, also allegedly tear-gassed Jewish worshipers. Witnesses say at least two people were hospitalized.

A group of men burst into the temple at 2 a.m., while "five or six" Jewish pilgrims were praying, according to Rabbi Yisrael Elhadad. The assailants screamed anti-Semitic slurs, throwing pork and red paint. They then attacked the pilgrims with tear gas who alerted police, but the men had left by the time the authorities arrived. Elhadad called the men "neo-Nazis."

Similar to Islam, in the Jewish faith pigs are seen as ‘unclean,’ and religious adherents are told not to eat the animals or use products made from their bodies. A pig’s head with a swastika carved into it was an attempt to desecrate the tomb inside the synagogue.

The government of Israel swiftly condemned the attack. In a Wednesday statement, Interior Minister Aryeh Deri said, "I was shocked to the very core to hear of the terrible and barbaric desecration that was done last night at the holy site of Rabbi Nachman from Breslov." Israelis called on the Ukrainian government to join them in condemning neo-Nazi intimidation.

The Ukrainian government joined the Israelis in decrying the attack. "The embassy of Ukraine condemns any forms of xenophobia, antisemitism and other expressions of intolerance, and works over the total elimination of them in the Ukrainian society," according to the Ukrainian embassy in Israel. Ukraine’s prosecutor general, Yuriy Lutsenko, is said to be personally overseeing an investigation. Other religious sites in Uman have been placed on high alert.

Nachman of Breslov was a significant figure in the history of Hasidic Judaism, a branch of the Jewish faith that studies both the Torah and the Kaballah, esoteric documents meant to address the relationship between humans and the spiritual realm. A popular and respected rabbi in his lifetime, Nachman has annually attracted thousands of pilgrims to his tomb since his death in 1810.

Breslov’s particular branch of Hasidism calls for joy and celebration, with widespread dancing and drinking among adherents. The influx of pilgrims, many of whom are drunk and rowdy, has caused tension with the Ukrainian locals. In 2010, a pilgrim was stabbed to death by a local man during an altercation over a vandalized car.

000000
Popular comments
But it was the Ukranian governments own bully boys who did it!!!