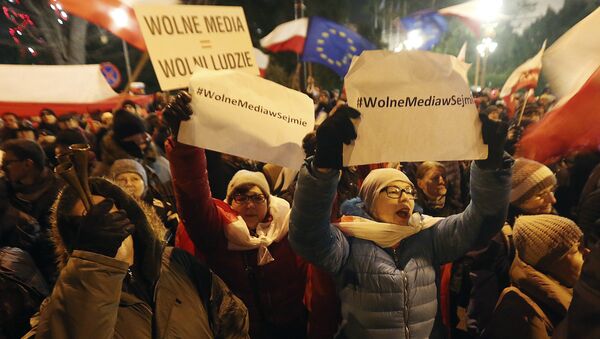 Tusk Tackles Poland Over Constitution, Media Protests as EU Crisis Looms
MOSCOW (Sputnik) — The political crisis started on Friday, when opposition Civic Platform party member Michal Szczerba was asked to leave the parliament session after criticizing the speakers' decision to limit media presence in the Polish parliament. Protests from other lawmakers prompted the speaker, who is a member of the ruling Law and Justice (PiS) party, to adjourn the session and reconvene in a different room without opposition members before passing a bill on amendments to the government budget.

"What worries me the most is that Poland's position in the world could lose its significance… Here, as usual, the government is to blame rather than the opposition. The government is responsible for the state of the country which it rules," Tusk told the Polish TVN24 channel on Tuesday.

The government should take the first step toward resolving the crisis, he added, noting that Friday's vote was indeed carried out in a dubious manner.

"The vote on the most important law was very questionable, tens of thousands of economic decisions rest on it," Tusk said.

The Major Political Conflict Looming in Poland That You May Have Missed
Poland has become a problem for the European Union since its constitutional crisis last year, when the ruling party unveiled controversial constitutional court reforms, according to the council president.

In late December 2015, the government enacted a reform stipulating that 13 out of the country's 15 constitutional tribunal judges must be present at the most important court cases instead of nine as had previously been the case. Critics believe that the reform will enable the ruling Law and Justice party to influence the tribunal's decisions. The bill also provides for the principle of the so-called blocking minority, according to which four judges may block motion during a meeting in full attendance.

"Today, Europe is evidently on the brink of disintegration, perhaps not of collapse, but of division. I am sure that this means problems for our region first and foremost… Out security and survival depend of how much we are rooted in Europe," Tusk said, stressing that the current government's actions continue to erode trust between the European Union and Poland.

Planned Media Access Restrictions Lead to Parliament Protests in Poland
Polish opposition, including the Civic Platform, the Committee for the Defense of Democracy (KOD) and the Nowoczesna party have been rallying supporters in Warsaw and other cities since late Friday. Opposition lawmakers are also continuing their sit-in inside the parliament building. The government condemned the protests while PiS rejected any breaches to parliament rules, stating that all lawmakers had been told via text messages that the session was moved. Friday's vote also gathered enough members of parliament to meet the constitutional quorum, according to the party.

The new media restrictions, which prompted the standoff, allow only a limited number of TV stations in Poland to record parliamentary sessions starting from next year. A number of Polish news organizations responded by boycotting any coverage of parliamentary activities on Friday. The decision has now been revoked but protesters continue to rally against Friday's budget vote as well as demanding the parliament speaker's resignation.