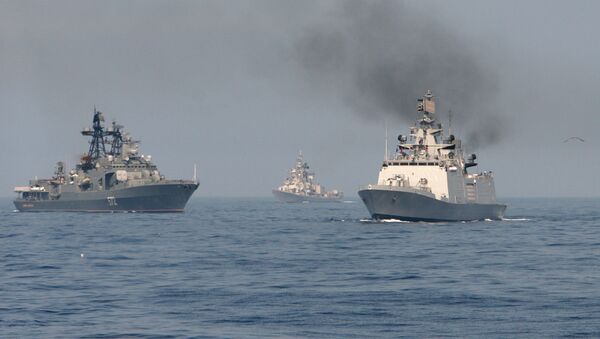 Russian and Indian warships practiced anti-submarine warfare in the Bay of Bengal.

“During the second day of the active phase of naval drills Indra Navy 2016, Russian and Indian warships practiced elements of ASW activities in the sea,” Matveev told reporters.

INDRA-2016: Indian and Russian Troops Perform Joint Exercise in Vladivostok
In the course of the drills, the participants fired reactive depth charges at a simulated enemy submarine in the Bay of Bengal, according to the spokesman.

The Indra Navy 2016 drills will be concluded later on Wednesday. The official ceremony and debriefing will take place on board of Indian INS Satpura frigate.

The drills are being held in the Bay of Bengal since December 14. This year, some 500 servicemen are engaged in the drills, according to the Russian Defense Ministry.