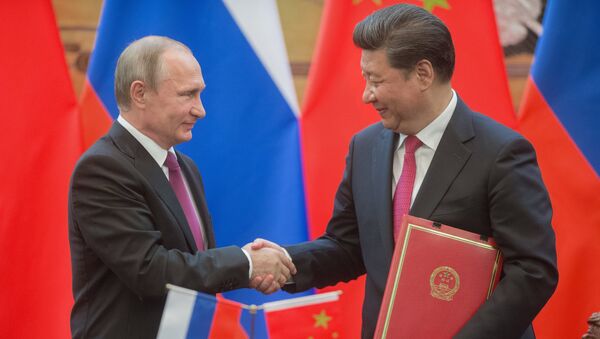 © Sputnik / Sergey Guneev
/
Go to the photo bank
Subscribe
China's Ambassador to Russia Li Hui described Beijing-Moscow relations as mature and stable, and said he hope they would receive an additional impetus next year.

MOSCOW (Sputnik) — Bilateral relations between Russia and China are mature and changes in international relations globally do not have a negative impact on these ties, China's Ambassador to Russia Li Hui told Sputnik in an interview.

"The relations between China and Russia are not affected by any changes in the international situation. They are mature and stable. It is a classic example of relations between modern states," Li said, adding that 20 years of strategic partnership between the two nations had contributed to the interests of both Moscow and Beijing and to the peace and stability both in the region and in the world.

The diplomat added that he was confident that in 2017 the ties between Moscow and China would receive an additional impetus in the light of the achievements reached in 2016.

"In 2016, China and Russia have moved further toward strengthening of strategic mutual trust, deepening of business cooperation, reinforcing of well-established friendly relations… I am certain that because of joint efforts of the two countries, Chinese-Russian relations in 2017 will gain further momentum and will achieve success," Li added.

Currently Russia and China are actively cooperating in a multitude of fields, most notably on energy, infrastructure, finance and defense.

The decision of both Moscow and Beijing to hold China-Russia Media Exchange Years in 2016 and 2017 has contributed to the strengthening of relations between the two nations, China's Ambassador to Russia told Sputnik.

"China and Russia started to hold China-Russia Media Exchange Years in 2016 and 2017. It has been a strategic decision of the two countries' top officials taking into consideration the development of relations between China and Russia, and has directed an exchange and cooperation between the two countries toward an enhancement," Li said.

China Russia’s Main Partner, Level of Trust Between Beijing, Moscow High
He added that within the framework of the media exchange years, media outlets from both Russia and China established ties with their counterparts from the other country and the majority of the scheduled events had already been held.

On December 17, 2015, Russian Prime Minister Dmitry Medvedev and his Chinese counterpart Li Keqiang attended the opening ceremony of the China-Russia Media Exchange Years. According to Russian Foreign Minister Sergei Lavrov, the cross-years are aimed at strengthening partnership and understanding "between the journalism communities and the people" of the two nations.

Russia and China have been successful in cooperating on integrating the Eurasian Economic Union (EAEU) and Silk Road projects, as announced by the two countries’ leaders last year, Li Hui told Sputnik.

Glorious Plan of Kazakhstan: Astana to Spend $20Bln on Silk Road Project
Li called on Russia and China to further cooperate “in accordance with the overall objective set by the leaders of the two countries, to promote joint projects, continually looking for new growth points."

Moscow and Beijing signed an agreement in May 2015 on integrating the Russia-led Eurasian Economic Union (EAEU) and China's Silk Road economic project.