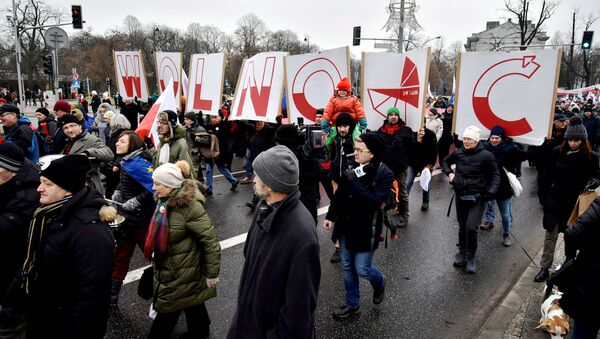 © REUTERS / Agencja Gazeta/Franek Mazur
Subscribe
A proposed ban on media access to parliament in Poland was lifted on December 20 in response to mass public protests – but an expert on Polish politics has told Sputnik no other concessions can be expected in the ruling Law & Justice party's (PiS) controversial reform program.

The restriction on media access to parliament was but one controversial measure in a raft of proposals and policies that have been pursued by PiS in Poland, which critics within and without Poland say constitute a growing constitutional crisis. Protests over the measures began outside Parliament on Friday 16 this year, and lasted until the ban was lifted.

Thousands in #Poland take it to the streets to #protest against a government proposal that would restrict the media: https://t.co/GMoeYi6UYK pic.twitter.com/0MT9XcQkdS

The Polish Parliament's press office said on the ban had been shelved, but rules on media access were still likely to change — although it "assured" concerned citizens and journalists these changes would not be introduced without broad consultations and agreements with reporters.

The apparent 'success' of public protests in derailing the plan may give some hope that other aspects of PiS' agenda will be similarly jettisoned, but Aleks Szczerbiak, Professor of Contemporary European Studies at the University of Sussex, told Sputnik no climb-down should be expected on other policies.

"The circumstances in this case were quite specific. The proposals were not central to the government's legislative program, brought the government into confrontation with journalists, the main conduit for political information filtering through to ordinary Polish citizens, and precipitated a situation that was in danger of escalating into really serious conflict with potentially unforeseeable consequences in the run-up to Christmas. The only other issue on which the government has backed down is abortion, which is again not central to the government's program, and the protests had started to draw in people who were not instinctively opponents of the government," Professor Szczerbiak told Sputnik.

This resistance has been largely confirmed by Polish politicians already. Senate speaker Stanislaw Karczewski has said the Polish Parliament's Upper House will continue to work on many of the controversial laws.

"There have been lots of anti-government demonstrations over the last year, but the government has not backed down on any other issue a result of any of them. The government believes most voters are concerned about whether the government is delivering on its social spending pledges, key to its victory in the election — which, in many Poles' view, it is," Professor Szczerbiak said.

"Only yesterday, the Law and Justice-backed President Andrzej Duda signed into law a bill to restore the retirement age to 60 for women and 65 for men, one of their flagship election pledges," he added.

The PiS' reticence will persist, believes Professor Szczerbiak, despite calls by MEPs for Poland's voting rights in the European Parliament to be restricted until the government makes amendments to its policies. 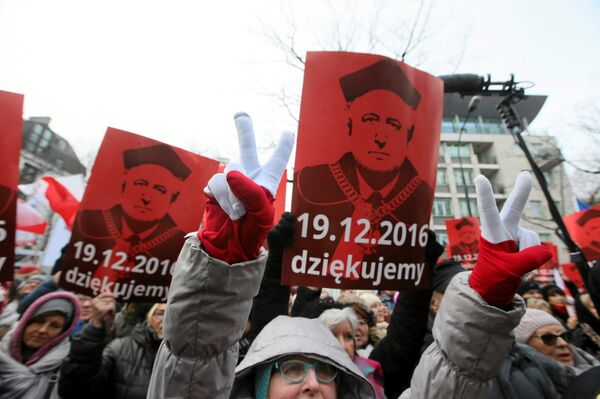 People hold signs with the image of Andrzej Rzeplinski, head of Poland's Constitutional Court, as they take part in demonstration in front of the Constitutional Tribunal in Warsaw, Poland December 18, 2016.
© REUTERS / Agencja Gazeta/Kuba Atys

The Polish government, he tells Sputnik, know that in order for any sanctions to be introduced there will have to be unanimity in the European Council, which there would not be, as Hungary has already pledged to veto any such proposal.

"While most Poles are strongly supportive of EU membership, they are more divided about whether the Commission should involve itself in Polish domestic political affairs, and also believe it is motivated more by dislike of PiS than a desire to protect democracy and uphold the rule of law," he said.