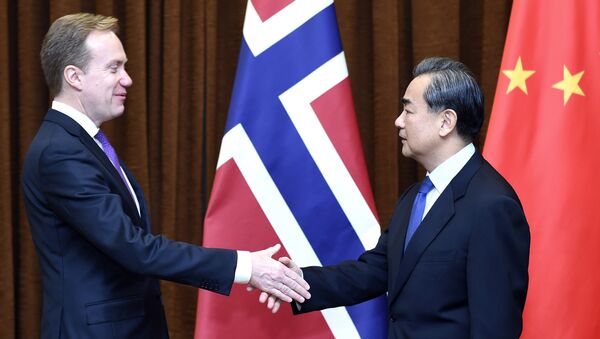 After six years of almost frozen relations and heavy economic losses, Norway has re-kindled its contacts with China. The spat, which was triggered by a Norwegian decision to award the Nobel Peace Prize to a Chinese dissident, came to an end when Norwegian Prime Minister Erna Solberg pledged to strike a profitable trade deal with China.

Norwegian Airline to Make Millions on Asian Tourists With Russia's Consent
Ironically, it was the very same Solberg who in 2010 was very supportive of the much-debated decision to award the Nobel Peace Prize to Chinese human rights activist Liu Xiaobo, which in Europe was hailed as an explicit condemnation of Chinese human rights violations. However, six years of political and economic standstill prompted Solberg to change her tune.

"Norway has had no political contact with China since 2010. This has been challenging for us in many international contexts and in many individual cases," Erna Solberg admitted to Norwegian national broadcaster NRK, citing "painstaking diplomatic confidence-building work on many levels."

According to Solberg, the cool in the bilateral relationship was especially taxing for Norwegian industry, which has been suffering due to the lack of political connections.

​Today, Norway seeks to benefit from opportunities that stem from cooperation with China, which is the world's second largest economy and a permanent member of the UN Security Council. Norwegian Foreign Minister Børge Brende admitted to plans to resume negotiations on a free trade agreement, as well as many technical issues, such as climate change and Arctic cooperation.

US, UK Troops to Tickle Russian Bear From Northernmost Norway
"It would provide great opportunities for employment in aquaculture, and maritime and offshore industry," Børge Brende said.

Knut Sunde, a branch director at the Federation of Norwegian Industries (NI) wrote in an e-mail to NRK that Norwegian exports to China reached 23 billion NOK ($2.7bln) last year. However, he admitted that it by no means equals the growth which other European economies have experienced. Norway's main exports to China were silicon, metals and maritime equipment.

While the Norwegian political establishment cheered the reconciliation with the country's major eastern trade partner, many pundits were critical of the decision to mend fences, arguing that the price was too high.

According to Marc Lanteigne, a senior researcher at the Norwegian Institute of International Affairs (NUPI), Norway acknowledged that the relationship was damaged and pledged to prevent such things from ever happening again.

"It is simply humiliating," Stein Ringen, a professor of political science at Oxford University and author of a critically acclaimed book on Chinese politics, told Norwegian newspaper Aftenposten. "We see how Norway had to stoop to Chinese demands. The gain, however, is rather symbolic," Ringen stated.

Science & Tech
Norway Hopes to Revamp Global Electricity Market With Drones and AI
According to Ringen, Norway has relinquished its right to pressure China on human rights violations and has become "too indulgent" in this process. According to Ringen, the Dalai Lama, also a Nobel Peace Prize winner, was snubbed by the Norwegian government during his 2014 visit to Oslo and had to endure a personal insult because Norway sought to mend fences with China. Finally, he expressed fears that the reconciliation agreement featured a secret clause according to which Norway recognized China's territorial claims in the South China Sea.

"I am very saddened by Norway's inability to defend the principles of freedom of expression and human rights in the face of a superpower like China. Besides, we've also seen some of the same complaisance towards the US in the Snowden affair," William Nygaard, Norwegian PEN chairman, told Aftenposten, claiming that Norwegian authorities showed how easily they may be subdued by superpowers.