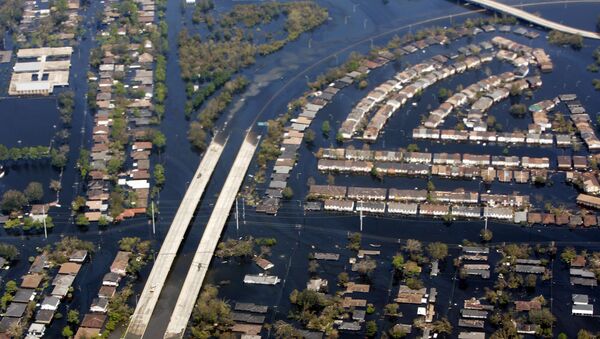 © AP Photo
Subscribe
International
India
Africa
New Orleans mayor Mitch Landrieu announced that his city’s police department has reached a $13.3 million settlement with families of the victims of a shooting that happened on the Danziger bridge following Hurricane Katrina.

At Least One Killed, Nine Wounded in New Orleans Shooting
The mayor of New Orleans, Mitch Landrieu, announced a settlement between city police and families of victims of an incident on the Danziger bridge 11 years ago. The settlement includes a separate case that involved the beating of Raymond Robair, who died one month before the storm.

Landrieu said that the settlement marks a "painful" moment in the history of the department, and sought to provide closure to both the victims and the city.

"In some small way, the lives that have been maimed and the lives have been taken were not lives that were or will be lived in vain," Landrieu said, as families of the victims stood behind him. "The people standing behind you have chosen to give us the grace and the blessing of forgiveness for what it is that happened to them."

During the incident on the Danziger bridge, police shot a group of unarmed civilians, including members of the Bartholomew family and a friend, James Brissette, who then died after the shooting. The youngest member of the family, Leonard Bartholomew IV, was the only family member who escaped unharmed, after hiding under the bridge. Immediately following the shooting of the Bartholomew family, police opened fire on another group of civilians, including the Madison family. Mentally ill Ronald Madison, 40, was the second person to be killed, while his brother Lance escaped unharmed. The incident is reported to have occurred because a nearby police crew, escorting a civilian convoy on an I-10 overpass, claimed that they saw an active shooter on the Danziger bridge. They also mistakenly told police arriving to the bridge that an officer had been shot.

Two additional police officers were sentenced to prison for the beating death of Raymond Robair, a 48-year-old handyman, in an incident that occurred one month before the hurricane. After beating Robair to death, the officers lied to doctors, claiming that the victim suffered a drug overdose. One of the officers later lied during an FBI investigation, as well.

Attending the news conference, LaShonda Enclade, Robair's daughter, forgave the city, but offered that forgiving the officers involved in her father's death is "something to be worked on," according to the Denver Post.

New Orleans Say ‘Nothing's Different From Before ‘ After Katrina Storm
According to Landrieu, the New Orleans Police Department (NOPD) has changed the way the police officers are trained as a result of the deaths, teaching police to deescalate situations, instead of shooting first. New protocols include severe punishment for officers if it is proved that they used firearms irresponsibly.

"If we find a problem, we do not make excuses. We take swift action against anyone who chooses to make a bad decision," said New Orleans police superintendent Michael Harrison. "You have my commitment that we will continue to build a professional, community-oriented police department."

Harrison added that NOPD officers are required to have their body cameras turned on 100 percent of the time, as one measure to counter police violence.

The city will pay out the settlements over the next 24 months, according to nola.com.