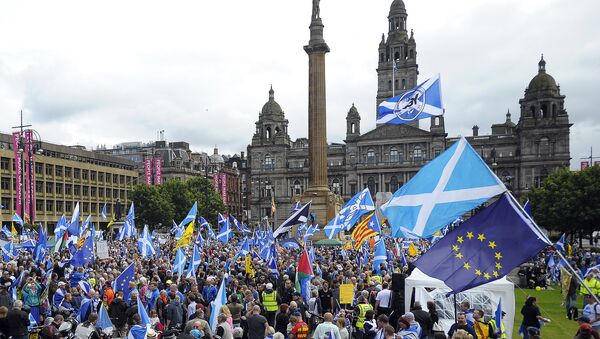 © AFP 2021 / Andy Buchanan
Subscribe
UK Prime Minister Theresa May will "carefully consider" the plans of Scotland's First Minister Nicola Sturgeon to have Scotland remain in the EU single market after Brexit, according to May's spokesperson.

"Scotland is already the most powerful devolved nation in the world. It has been given a huge number of powers and that has been a real success," the spokesperson said when asked about Sturgeon's proposals for additional power, adding that the prime minister will "carefully consider" the plans, as quoted by the Independent newspaper.

The spokesperson added that the British government is committed to working together with all devolved administrations, including Scotland, in order to reach a deal which benefits all parties once the United Kingdom leaves the European Union.

Scottish Labor Party Put UK Membership Above EU Single Market
On Tuesday, Sturgeon released a paper entitled Scotland's Place in Europe, wherein the first minister proposes how the United Kingdom should stay within the single market and customs union. Sturgeon also proposes a transfer of power to allow Scotland to remain within single market and customs union separate from the United Kingdom.

In June, the United Kingdom voted in a referendum to leave the European Union. Soon after the referendum, UK Prime Minister Theresa May said the country would trigger the Article 50 of the EU Lisbon Treaty by the end of March 2017, thus beginning withdrawal negotiations.