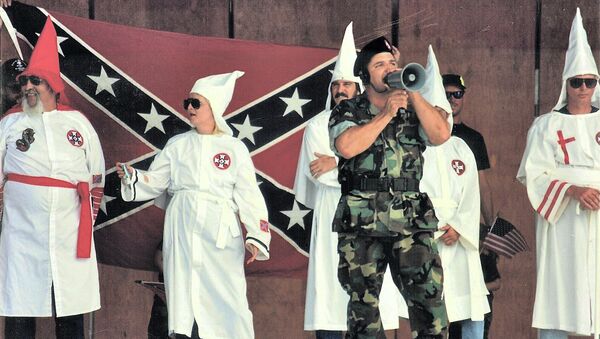 © Flickr / Mark Mathosian
Subscribe
A&E’s newest reality show, which will follow the lives of four families immersed in the Ku Klux Klan, has attracted controversy and criticism for its divisive subject matter.

In a year in which racial divisions in the United States have taken higher precedence than in decades, A&E’s Generation KKK reality show seems a good choice for a documentary. The series will follow KKK families, all of whom agreed to be filmed, and, concurrently, activists with the One People’s Project anti-racism civil liberties group.

Many Twitter users have protested what they see as a popularization of a fringe group that, while numerous in the early 20th century, now, by even the most generous estimates, has just 8,000 members. The show, which has not yet aired, has been labeled a "recruitment tool" and a "normalization" of racist rhetoric historically embodied by the KKK.

"We certainly didn’t want the show to be seen as a platform for the views of the KKK," Rob Sharenow, general manager of A&E, told the New York Times. "The only political agenda is that we really do stand against hate."

"'Generation KKK' is a documentary series," Sharenow said in a separate statement, "that exposes the ugly truth about how the hate group attempts to indoctrinate children. The series focuses on a team of activists working to prevent the next generation from continuing the cycle of hate. The documentary series takes a clear stance against hatred of any kind."

But many are unconvinced, citing that the network has recently been best known for its Dog the Bounty Hunter, Duck Dynasty, Storage Wars, and Hoarders, is now leaning toward edgy and politically-charged content.

A&E, however, has been seen to be attempting to expand its profile, from schlocky reality programming to more serious fare. Documentaries, including a recent popular Scientology exposé entitled Leah Remini: Scientology and the Aftermath; Emmy Award-winning Born This Way, which chronicles the lives of seven Americans with Down Syndrome, and critically-acclaimed scripted programs such as crime drama Longmire and horror series Bates Motel are thought to be the beginning of a change in programming philosophy at the network.

000000
Popular comments
The sensitivities of these millennials are too much for grown-up documentaries. They all should be watching Barney and children's films, given their maturity level. Millenians are dumb enough to go jump in the lake, if you tell them to. They are way too sensitive to this kind of stuff, since they cannot think for themselves at all, and can only think what they are told to think by others.
double bonus
20 December 2016, 05:53 GMT
000000
Newsfeed
0
New firstOld first
loader
LIVE
Заголовок открываемого материала
Access to the chat has been blocked for violating the rules . You will be able to participate again through:∞. If you do not agree with the blocking, please use the feedback form
The discussion is closed. You can participate in the discussion within 24 hours after the publication of the article.
To participate in the discussion
log in or register
loader
Chats
Заголовок открываемого материала
Worldwide
InternationalEnglishEnglishMundoEspañolSpanish
Europe
DeutschlandDeutschGermanFranceFrançaisFrenchΕλλάδαΕλληνικάGreekItaliaItalianoItalianČeská republikaČeštinaCzechPolskaPolskiPolishСрбиjаСрпскиSerbianLatvijaLatviešuLatvianLietuvaLietuviųLithuanianMoldovaMoldoveneascăMoldavianБеларусьБеларускiBelarusian
Transcaucasia
ԱրմենիաՀայերենArmenianАҧсныАҧсышәалаAbkhazХуссар ИрыстонИронауОssetianსაქართველოქართულიGeorgianAzərbaycanАzərbaycancaAzerbaijani
Middle East
Sputnik عربيArabicArabicTürkiyeTürkçeTurkishSputnik ایرانPersianPersianSputnik افغانستانDariDari
Central Asia
ҚазақстанҚазақ тіліKazakhКыргызстанКыргызчаKyrgyzOʻzbekistonЎзбекчаUzbekТоҷикистонТоҷикӣTajik
East & Southeast Asia
Việt NamTiếng ViệtVietnamese日本日本語Japanese中国中文Chinese
South America
BrasilPortuguêsPortuguese
NewsfeedBreaking
22:11 GMTBill Clinton to Remain Hospitalized Until Sunday - Spokesman
22:08 GMTTexas Senate Passes Athlete Bill Targeting Trangender Youth
21:37 GMTNew Satellite Images Reportedly Show That Trump's Scotland Golf Course Wrecked a Sand Dune System
20:59 GMTAt Least 10 People Died, 18 Missing in India's Kerala State Due to Bad Weather - Reports
20:10 GMTPablo Escobar’s “Cocaine Hippos” Breeding Out of Control
19:50 GMTIsraeli Army Creates Secret Base to Monitor Iran's Activities - Reports
19:24 GMTMacron Slams 1961 Paris Police Killing of Algerian Protesters as 'Inexcusable' - Office
19:03 GMTTrump Says Results in Arizona County Should Be Decertified Amid Precinct’s 100.6% Ballot Return Rate
19:00 GMTNew Projections for Our Planet's Future Climate Pain 'Earth Alien to Humans'
18:51 GMT'Two-Word Vulgarism': Anti-Biden Graffiti Spotted in POTUS' Home State
18:40 GMTBoJo Reportedly Decried by French Politicians, Diplomats as ‘Populist Incapable of Keeping His Word’
18:13 GMTHardy Helper: New Penis-Attached Sensor May Assist Men in Battling Erectile Issues, Says Media
18:11 GMTVigil in Leigh-on-Sea Following Fatal Attack on MP David Amess
18:11 GMTMoney Printer Go Brrrr: Biden Blasts GOP Over $2 Trln Tax Cut While Pushing $4 Trln+ in New Spending
17:54 GMTUS Reportedly Probing Possible Cases of 'Havana Syndrome' Among Embassy Staff in Bogota
17:20 GMT'Impossible to Say No to Conor': Mourinho Post Photos of Him Drinking Whiskey With McGregor
16:35 GMTEx-Obama Aide Hushes Biden as POTUS Threatens Prosecution for Trump Team Holdouts in 6 January Probe
16:16 GMTNew Accuser Appears: Russian Woman Claims Jeffrey Epstein Used Her for 'Sexual Gratification'
15:56 GMTTexas Constable Deputy Fatally Shot, Two Others Injured During 'Ambush' Outside Nightclub
15:41 GMTNationwide Anti-Fascist Demonstration of Italian Trade Unions Taking Place in Rome - Photo