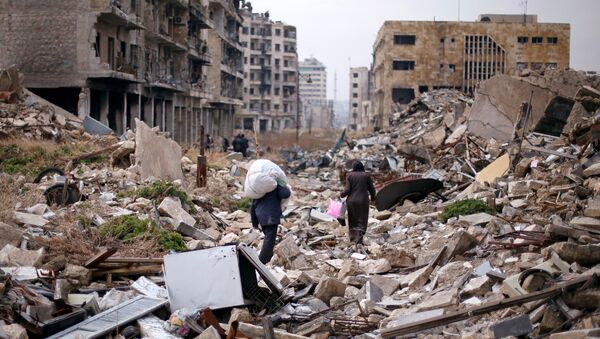 The European Union and the Arab League have agreed to take part in rebuilding post-civil war Syria once a political transition begins in the country, the two regional blocs' foreign ministers said.

CAIRO (Sputnik) — The fourth ministerial meeting between the League of Arab States and the European Union took place on Tuesday in Cairo. The Arab side was led by Tunisian Foreign Minister Khemaies Jhinaoui, while European ministers were led by EU foreign policy chief Federica Mogherini.

"The Ministers finally expressed their commitment to support the reconstruction of Syria only once an inclusive political transition is firmly underway, in order to support the safe return of the millions of Syrian people who have fled their home," the ministers said in a joint declaration after the meeting on Tuesday.

The statement also said the ministers were concerned with the situation in Aleppo and condemned the recent recapture of the city by Syrian government forces calling the offensive an "indiscriminate attack." The joint statement called for humanitarian access to besieged areas in Aleppo and the rest of Syria, as well the immediate cessation of hostilities throughout the country.

During the ministerial meeting, the sides also discussed counter-terrorism, illegal migration, international crime as well as the conflicts in Libya, Yemen and Iraq.

'Syrian Army Better Positioned to Retake Idlib From Terrorists Than in Aleppo'
Syria has been devastated by a bitter civil war ongoing since 2011 with the city of Aleppo becoming one of its major battlegrounds. On December 16, the Russian Defense Ministry's center for Syrian reconciliation said that the Syrian army operation to liberate the eastern neighborhoods of Aleppo was over, and that Syrian government troops were eliminating separate hotbeds of militant resistance.

A number of Western officials accused Syrian troops of committing atrocities during the rapid offensive on militant-held areas. In response, Russia stressed the operation was being carried out as humanely as possible with care taken to let civilians flee along available corridors. The Syrian government also allowed lightly armed militants safe passage out of the city into the Idlib province, but the opportunity was not seized as the Nusra Front vowed to continue resistance.

The Arab League, established back in 1945, comprises 22 regional states, which are striving to cooperate on political, economic, cultural, scientific, and social issues in order to promote the interests of the Arab world. Syria was suspended from the bloc in 2011 over accusations of using repression at the onset of its five-year civil war.