Al-Jazeera Board Member: Russia 'Deserved It' After Assassination of Ambassador 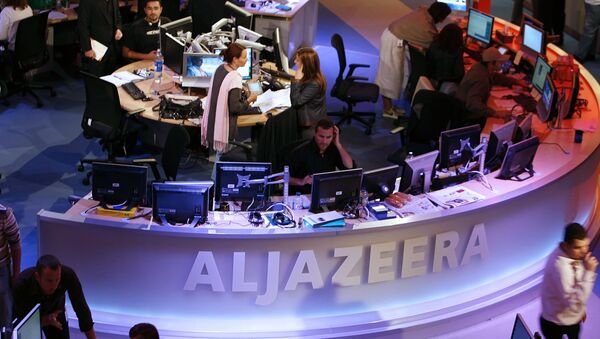 © AFP 2021 / KARIM JAAFAR
Subscribe
An Al-Jazeera board member is publicly celebrating the assassination of Russian Ambassador Andrey Karlov, claiming that the nation “deserved it.”

Russian Ambassador's Assassin Tried to Kill Russian-Turkish Partnership
Dr Elham Badar, a prominent journalist in Qatar and board member of the Qatari government state news outlet, tweeted in Arabic dozens of times as the news of the terrorist attack in Ankara broke.

Included in her rant are tweets claiming that “Russia deserves the worst,” over alleged actions in Syria. Badar, with some 140,000 followers, also tweeted sympathy for the terrorist assassin, saying that the killing was a “human response to Russian barbarism in Syria.”

“This scene will be repeated with the killing of ambassadors to other countries sympathetic with Russian criminality in Aleppo,” Badar said in another, borderline threatening, tweet.

“Don’t forget Syria! Don’t forget Aleppo!…Until our towns are safe, you won’t enjoy security either. Everyone who is involved in this will pay a price. Only death can take me from here,” Altintas shouted.

The assassination has been widely labeled as an attempt to derail Russian-Turkish cooperation in the fight against terrorism. A diplomatic discussion between foreign ministers of Russia, Turkey and Iran is going on as planned on Tuesday.

Karlov’s killing has been condemned by world leaders, including the White House and Syrian and Turkish leaders.

000000
Popular comments
maybe it is time Russia gave a helping hand to the Qatari, Bahraini and Saudi people so they could get ride of those western puppets ruling over them. But instead they do business deals together
freeWill
20 December 2016, 23:43 GMT
000000
iam really disgusted how russia treats the saudis and their little slave states as if they were partners and it should be russia who puts pressure on them not iran since as soon iran does it the west claims that its a sectarian issue when in truth its opposing mass murderers who killed more people in their war on yemen than anybody else except their wahabi terrorists in the wars of this decade and when it comes to wahabism how many times does it need to attack russia but still no sanctions on the gcc terrorist states no putting them in place but business like partners russia really needs to think about what it does when it comes to some countries

Amin von Elysion
20 December 2016, 23:57 GMT1
000000
Newsfeed
0
New firstOld first
loader
LIVE
Заголовок открываемого материала
Access to the chat has been blocked for violating the rules . You will be able to participate again through:∞. If you do not agree with the blocking, please use the feedback form
The discussion is closed. You can participate in the discussion within 24 hours after the publication of the article.
To participate in the discussion
log in or register
loader
Chats
Заголовок открываемого материала
Worldwide
InternationalEnglishEnglishMundoEspañolSpanish
Europe
DeutschlandDeutschGermanFranceFrançaisFrenchΕλλάδαΕλληνικάGreekItaliaItalianoItalianČeská republikaČeštinaCzechPolskaPolskiPolishСрбиjаСрпскиSerbianLatvijaLatviešuLatvianLietuvaLietuviųLithuanianMoldovaMoldoveneascăMoldavianБеларусьБеларускiBelarusian
Transcaucasia
ԱրմենիաՀայերենArmenianАҧсныАҧсышәалаAbkhazХуссар ИрыстонИронауОssetianსაქართველოქართულიGeorgianAzərbaycanАzərbaycancaAzerbaijani
Middle East
Sputnik عربيArabicArabicTürkiyeTürkçeTurkishSputnik ایرانPersianPersianSputnik افغانستانDariDari
Central Asia
ҚазақстанҚазақ тіліKazakhКыргызстанКыргызчаKyrgyzOʻzbekistonЎзбекчаUzbekТоҷикистонТоҷикӣTajik
East & Southeast Asia
Việt NamTiếng ViệtVietnamese日本日本語Japanese中国中文Chinese
South America
BrasilPortuguêsPortuguese
NewsfeedBreaking
15:44 GMTIsrael Will Reportedly Push US to Strike Iranian Facility Amid Lack of Progress in Vienna Talks
15:41 GMTAmerica Unveils First-Ever Strategy to Battle Corruption at Home and Abroad
15:30 GMTChina May Build Military Base in Equatorial Guinea Amid Beijing’s Tensions With Washington
15:15 GMTKremlin: Putin Will Listen to Biden's Proposals on Ukraine 'With Great Interest'
15:15 GMTNYC to Use 'Preemptive Strike' Against Omicron With Vaccine Mandate for all Businesses, Mayor Says
15:08 GMT3,000 Security Officers Guard India's Mathura as Hindu Group Threatens to Install Idol in Mosque
14:59 GMTAmid Rumours of US Boycott of Beijing Olympics, How Could the Move Affect the Games?
14:52 GMTUK Policing Minister Not Surprised Over Reports of Drug Use in Parliament Building
14:45 GMTLabour Unions Protest in Brussels Against Low Wages, Expensive Electricity - Photos
14:26 GMTSpanish Court Rules Employee Can be Fired for Job Abandonment During Pandemic - Reports
14:18 GMTAnger and Shock After Intruders Vomit and Urinate at Site of Manchester Arena Bombing Memorial
14:15 GMTUS, UK, Canada Concerned by Tigrayans Arrested Without Charge in Ethiopia
14:07 GMTLionel Messi, Neymar or Himself: Kylian Mbappe Reveals Who's 'Boss' at Paris Saint-Germain
13:58 GMTFormer Indian Shia Leader Embraces Hinduism After 'Death Threats From Muslim Groups'
13:48 GMTMarine Le Pen Accuses EU of 'Playing Role of Firefighter-Pyromaniac' in Ukraine-Russia Tensions
13:47 GMT'Happy a Team Like Barcelona is Interested in Me', Says Salah Amid Liverpool Contract Impasse
13:30 GMTEarth is Getting Its Own Black Box That Will Tell What Caused Humanity's Demise
12:58 GMTChina Says Plots to Thwart Ties With Solomon Islands 'Doomed' as PM Survives No-Confidence Vote
12:53 GMTPutin in Meeting With Modi, Discusses Drug-Trafficking, Terrorism and Situation in Afghanistan
12:46 GMTSri Lanka Demands Compensation From Pakistan Over Brutal Mob Killing of Factory Manager