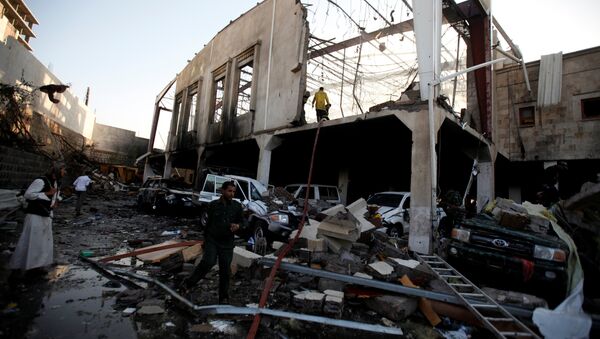 © REUTERS / Khaled Abdullah
Subscribe
A decision by Washington to cut arms sales to Saudi Arabia is nothing but a political move, Andrew Smith, spokesman for Campaign Against Arms Trade, told Sputnik.

US Halts Weapons Sales to Saudis Over Growing Body Count in Yemen Conflict
In an interview with Sputnik, Andrew Smith, spokesman for Campaign Against Arms Trade, a UK-based NGO, remained cautiously optimistic about Washington's decision to scrap its arms sales to Saudi Arabia.

The interview came amid reports that the United States is halting arms sales to Saudi Arabia in response to civilian casualties in the Kingdom’s airstrikes on Yemen.

Last week, the Obama administration expressed concerns over "flaws" in Saudi air strikes in Yemen that had often lead to civilian deaths.

In October, more than 140 people were killed in a strike on a funeral in the country. The Saudi-led coalition supporting Yemen's government against the opposition Houthis was reportedly responsible for the devastating attack. 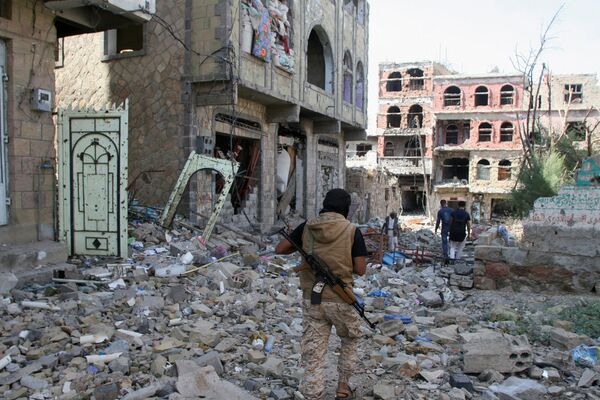 A pro-government fighter walks at the site of recent battles between Houthi fighters and pro-government troops , on the second day of a 48-hour ceasefire in the southwestern city of Taiz, Yemen November 20, 2016
© REUTERS / Anees Mahyoub

Following the incident, the White House warned Saudi Arabia that US security co-operation was "not a blank check." Now, precision-guided weapons will no longer be delivered to Saudi Arabia, according to an unnamed Pentagon official who was quoted by the BBC.

But while some sales are being reportedly scaled back, the US said it will continue to provide Saudi Arabia with intelligence focused on border security. It will also provide training for pilots involved in the Saudi-led air campaign, to prevent civilian casualties wherever possible, the official added.

Commenting on the matter, Andrew Smith said that the United States' decision to cut arms sales to Saudi Arabia is "politically significant" but that it will not add to a shift in Washington's arms sales policy on Saudi Arabia.

Much will depend on US President-elect Donald Trump's position on the matter, and his entering office may "definitely change" the "situation for the better,” according to Smith.

In any case, Washington halting arms sales to Saudi Arabia will not result in significant changes in its foreign policy on this country," he reiterated.

Yemen on Brink of Starvation as Food Supplies Run Out 'Fast'
In August, the United Nations human rights office reported that at least 60 percent of the 3,800 civilians killed since the conflict began in March 2015 had lost their lives in Saudi-led military attacks.

000000
Popular comments
In US and UK big money matters more than peoples' lives!!!

sapper
19 December 2016, 13:29 GMT1
000000
Newsfeed
0
New firstOld first
loader
LIVE
Заголовок открываемого материала
Access to the chat has been blocked for violating the rules . You will be able to participate again through:∞. If you do not agree with the blocking, please use the feedback form
The discussion is closed. You can participate in the discussion within 24 hours after the publication of the article.
To participate in the discussion
log in or register
loader
Chats
Заголовок открываемого материала
Worldwide
InternationalEnglishEnglishMundoEspañolSpanish
Europe
DeutschlandDeutschGermanFranceFrançaisFrenchΕλλάδαΕλληνικάGreekItaliaItalianoItalianČeská republikaČeštinaCzechPolskaPolskiPolishСрбиjаСрпскиSerbianLatvijaLatviešuLatvianLietuvaLietuviųLithuanianMoldovaMoldoveneascăMoldavianБеларусьБеларускiBelarusian
Transcaucasia
ԱրմենիաՀայերենArmenianАҧсныАҧсышәалаAbkhazХуссар ИрыстонИронауОssetianსაქართველოქართულიGeorgianAzərbaycanАzərbaycancaAzerbaijani
Middle East
Sputnik عربيArabicArabicTürkiyeTürkçeTurkishSputnik ایرانPersianPersianSputnik افغانستانDariDari
Central Asia
ҚазақстанҚазақ тіліKazakhКыргызстанКыргызчаKyrgyzOʻzbekistonЎзбекчаUzbekТоҷикистонТоҷикӣTajik
East & Southeast Asia
Việt NamTiếng ViệtVietnamese日本日本語Japanese中国中文Chinese
South America
BrasilPortuguêsPortuguese
NewsfeedBreaking
02:16 GMTIsrael Going Further With Construction of Over 1,300 Housing Units in West Bank
01:15 GMTPandemic Will End When World Chooses to End It, WHO Chief Says
YesterdayJamie Lynn Spears Says Parents Pressured Her to Get an Abortion to Maintain Her Career
YesterdayFriends Alum James Michael Tyler Dead After Battle With Prostate Cancer Battle
YesterdayMeghan McCain Thanks Trump for Publicity After 45's Scathing Statement Against Her Late Father
YesterdaySmoke in the Cabin Forces American Airlines Flight to Make an Emergency Landing
YesterdayColombia Getting Ready to Extradite Most Wanted Drug Dealer Otoniel to US - Minister
YesterdayQatar Frustrated About Lack of Response From US to Request for Drone Sale - Reports
YesterdayMax Verstappen Wins US Formula One Grand Prix, Lewis Hamilton Finishes Second
YesterdayOld Trafford Has Fallen: Liverpool Desecrate Manchester United on Hallowed Ground
Yesterday'Cyclone Bomb': Weather Forecasters Say US West Coast Should Brace For Huge Subzero Storm
YesterdayTehran Vows Israel Will Suffer 'Thousands of Billions' of Dollars in Damage if It Dares Attack Iran
Yesterday'Greedy, Extremely Selfish' Mo Salah Branded 'Best Player in the World This Season'
YesterdayBiden Administration Reportedly Set to Roll Out Tax Targeting 0.0002% Wealthiest Americans
YesterdayPolice Presence in Nottingham Bolstered Following Wave of Spiking Reports, Says Media
YesterdayLiverpool Beats Manchester United 5:0 in Premier League
Yesterday'Extremely Concerning': China-Bhutan MoU Could 'Spell Disaster' For India, Warns Congress Party
Yesterday'What's He Trying to Say?': Snowden's Tweet in Russian With Soviet Poster Puzzles Netizens
YesterdayWatch Syrian Troops Block US Military Convoy, Force It to Turn Around
YesterdayEd Sheeran Tests Positive for COVID, Will Do Planned Performances From Home