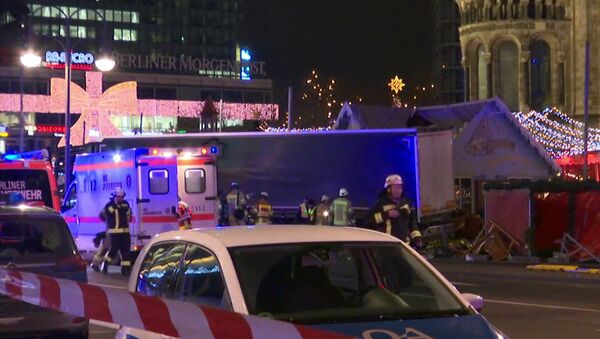 © AP Photo / AP
Subscribe
International
India
Africa
Twelve people have been killed and some 48 more injured after a truck rams into a busy crowd at one of Berlin's Christmas markets.

Police have detained and arrested the driver suspected of deliberately crashing his truck into a crowd at a busy Christmas market in the German capital of Berlin. The second suspect who was in the truck is dead, according to law enforcement officials. The pair took lives of at 12 people and injured 48 in an attack that seems to resemble a horrific terrorist act in Nice, France. Police think that terrorism is the most plausible explanation.

Law enforcement officials say that the violence was "deliberate." There is no road within the vicinity, according to an eyewitness.

​The vehicle slammed into crowds Monday evening in Breitscheidplatz. The suspects drove straight into the Christmas tree at the center of the market. The black auto had a Polish autocard, according to a German newspaper. Eyewitnesses also reported hearing a loud bang, but no details so far have been provided as to what caused the pop.

One of the drivers managed to escape from the scene of the tragedy while the second perpetrator was found dead. However, after a massive manhunt, Berlin police reported that the suspected terrorist was apprehended and has been taken into custody.

According to eyewitness reports, the truck was going about 45mph before bashing into crowds and reportedly made no attempts to slow down. The tragedy closely resembles the July terrorist attacks in Nice, France that claimed the lives of 86 while wounding 434. In Nice, a large transportation truck plowed through crowds celebrating Bastille Day. Later police confirmed that the driver was a Daesh sympathizer, who aimed to kill as many people as possible in a suicide mission.

UPDATE: Police in Berlin now suspect the vehicle was stolen from a construction site in Poland. Officials have confirmed that 12 people were killed and 48 were injured in the attacks.