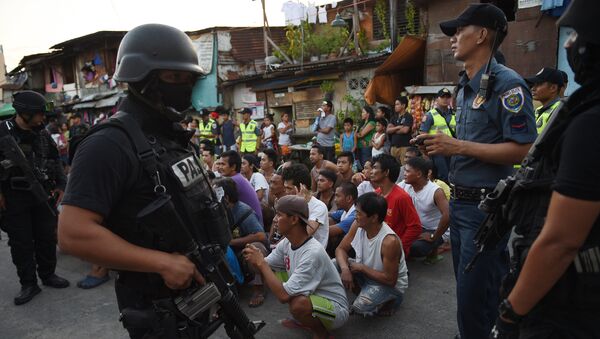 Total of 88 percent of Philippine nationals are satisfied with President Rodrigo Duterte’s campaign to counter illegal drugs, according to the poll.

Duterte, a former city mayor with a crime-fighting reputation, was sworn in as president in late June on promises to crack down on illegal drugs and end criminality in the country within six months. According to media reports, thousands of people have already been eliminated during his campaign against drugs.

According to the poll by the Social Weather Survey (SWS) independent research institute, a total of 88 percent of the polled are satisfied with the program, and believe it helped decrease the intensity of the country's drug problem. In particular, 56 percent "strongly agree" with it, while 32 percent "somewhat agree."

Duterte Says US Forces Must Be Prepared to Leave Following Economic Aid Halt
Just 3 percent of the polled do not agree that Duterte's program works, while the remaining 9 percent are undecided on the issue.

Apart from the issue of drug trafficking, Philippines are concerned with the threat of extra-judicial killings, and 78 percent of the polled are afraid of falling victims of such killings, with 45 percent being "very worried." Only 12 percent were not worrying about the issue.

According to the Philippine National Police (PNP), the country's law enforcement officers have killed over 2,000 since July 1, when Duterte assumed office.