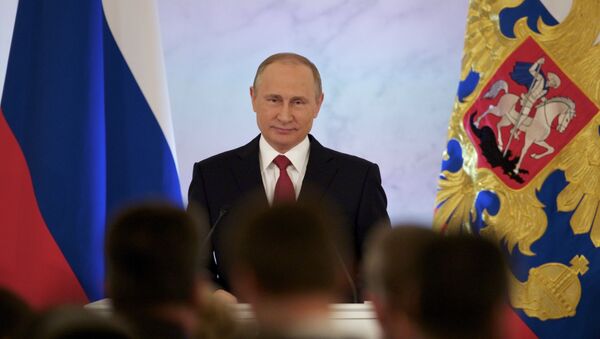 Andrew Korybko
All materials
Russia's decision to host summits on Syria and Afghanistan is aimed at furthering the prospects for the emerging Multipolar World Order.

The global balance of power has decisively shifted over the past couple of years, and it has a lot to do with Russia’s proactive stance in confidently resisting the US’ Hybrid Wars all across Eurasia. This isn’t “feel good” punditry either, since empirical evidence exists to justify the claim that Russia is now the indispensable player in resolving the Wars on Syria and Afghanistan.

Aleppo Liberation Exposed Mainstream Media and Their Lies About Syria
Take for example the fact that the Russian, Turkish, and Iranian Foreign Ministers will hold a trilateral meeting in Moscow on Tuesday to discuss their anti-terrorist strategies in Syria, and factor in President Putin’s earlier suggestion that they all facilitate intra-Syrian peace talks in Kazakhstan sometime soon.

The thought that the top diplomats from all three of these Great Powers would sit down and hash out a multilateral solution to the War of Terror on Syria would have been utterly inconceivable a year ago after the tragic November 2015 incident threatened to dangerously jeopardize the long-standing peace between Russia and Turkey, but lo and behold, Tuesday’s meeting isn’t a ‘political fantasy’ and is in fact slated to occur, as is the future intra-Syrian gathering that they’re all organizing in Kazakhstan.

While it might be somewhat surprising for casual observers or agenda-driven pundits to even countenance, it can’t be said to have been totally unexpected, since the author himself forecast the direction of these events in a series of articles over the summer for the Moscow-based Katehon think tank. In particular, these are “Post-Coup Turkey Will Be Distinctly Eurasian”, “Turkey Crosses Into Syria: Unipolar Conspiracy Or Multipolar Coordination?”, and “Turkey In Syria, The FSA, And The Upcoming Quarrel Over Syria’s Constitution”. Each of these pieces should be carefully read by anyone interested in the finer details about these three interrelated topics, but the general idea is that the failed pro-US coup in Turkey served as a catalyst for Ankara’s multipolar tilt towards Moscow and Tehran, thus leading to the incipient formation of a Tripartite arrangement of Great Powers.

Citizens of Liberated Aleppo: 'Terrorists Could Not Conquer Our Spirit' (PHOTOS)
The author also wrote about the geopolitical prospects that such a 21st-century (Mideast) Concert Of Great Powers could entail in a series of articles about this Tripartite, including one directly related to the “Syraq” battlespace that most directly affects all of them, but up until now no other analyst had given currency to this forecast.

That just changed the other day, however, after The Duran’s Editor-In-Chief and fellow Sputnik columnist Alexander Mercouris wrote an article titled “Vladimir Putin outlines road map for Syrian peace settlement”. In it, he says that “There is also talk of a tripartite summit involving Russia, Turkey and Iran to discuss a Syrian settlement” and that “Putin’s proposed conference at Astana would…place Iran centre stage, and appears to be intended to limit the negotiations to settle the conflict to the leading powers directly involved in the conflict in Syria: Russia, Turkey and Iran.”

This is indeed what is happening, and it’s foreseeable that the Tripartite will put the finishing touches on the forthcoming Kazakhstan intra-Syrian peace talks during Tuesday’s Moscow Summit and thus pave the way for finally streamlining a workable solution to the War on Syria.

But Syria isn’t the only terrorist-afflicted country which Russia is intensely devoted to helping, as Afghanistan also figures prominently on Moscow’s diplomatic agenda.

Obama Admits US Cannot Defeat Taliban, End Violence in Afghanistan
The third round of trilateral discussions between Russia, Pakistan, and China on Afghanistan are scheduled to take place in Moscow on 27 December, thus demonstrating that Russia is working hard to position itself as the indispensable go-to player for all sorts of anti-terrorist activity, whether it’s military like in Syria or diplomatic such as in Afghanistan. In order to understand the latter, it’s necessary to expound a bit about Russia’s strategy in Afghanistan and South Asia more broadly.

For over the past year already, Russia and Pakistan have been engaged in an historic under-the-radar rapprochement which has seen the two heated Cold War rivals amicably move past their former differences in order to begin the process of entering into a future-focused partnership. In practice, this has already resulted in both sides unprecedentedly cooperating on bringing peace to Afghanistan out of the shared interest that they both have in stopping the recent spread of Daesh in the country, but it’s also led to them brainstorming avenues for enhanced economic engagement as well.

China is presently constructing the $46 billion China-Pakistan Economic Corridor (CPEC) through the South Asian state, which is by far Beijing’s largest New Silk Road investment anywhere. The author wrote about the game-changing opportunities that CPEC opens up for the multipolar world in a September 2015 article for the Russian Institute of Strategic Studies about why “Pakistan Is The Zipper Of Pan-Eurasian Integration”, arguing that it’s also in Russia’s grand strategic interests to eventually link the Eurasian Union to this megaproject.

Pakistan Interested in Consultation With Russia on Afghan Peace Process
Despite some earlier mixed signals about Russia’s planned involvement with it (partially explainable due to Moscow’s suspected “deep state” divide over India), Russian Ambassador to Pakistan Alexey Dedov extolled the benefits of CPEC in an exclusive interview with Radio Pakistan last week by saying that he “strongly supports” the initiative because it’s “really crucial for the economy of Pakistan and regional connectivity”.

He also importantly remarked that CPEC is part of China’s New Silk Road project, and because Russia envisions merging the Eurasian Union with this endeavor, he “cannot exclude” that this might one day translate to Eurasian Union-CPEC integration as well. Anti-terrorist cooperation and diplomatic engagement with Pakistan vis-à-vis Afghanistan would go a long way towards building the type of trust that would naturally precede such a major geopolitical development as Russia’s eventual New Silk Road connectivity with Pakistan, and it also serves as a template that all other leading Eurasian states could follow in the future.

The SCO As The Center Of The Emerging Multipolar World Order

Having briefly described the ambitious strategic logic underpinning the Russian-Pakistani rapprochement, it should now be more understandable to the reader why Islamabad is participating in the upcoming Afghan Summit in Moscow. Accordingly, it’s now time to link this event together with its related Syrian one which will take place Tuesday in illustrating the bigger picture at play behind Russia’s decision to host anti-terrorist gatherings aimed at resolving both of these wars.

Alternative to EU? Prospects of Turkey Joining SCO
The first detail to be elaborated on is how each set of participants are united through the Shanghai Cooperation Organization (SCO), whether as an actual member (Russia and China), acceding member (Pakistan), observer (Iran), or dialogue partner (Turkey). Geopolitically, the latter three form a contiguous belt of South Eurasian Rimland states which were previously joined together under the Cold War-era and UK-led Central Treaty Organization (CENTO) from 1955-1979.

As fate would have it, none of these governments are reliable Western pawns anymore and have in fact completely reversed their prior unipolar trajectories and are now multipolar-focused on the future, ergo their decision to gather in Moscow to discuss solutions to the US-led wars on Syria and Afghanistan.

Russia thus has the exciting chance to serve as the diplomatic bridge connecting both pairs of summit participants in organizing the basis for broad multipolar coordination in resolving these two conflicts.

After all, both summits are taking place in Moscow and were initiated by the Russian side, so the Ministry of Foreign Affairs clearly has the initiative in moving forward with this strategy if it so chooses. Should it do so, then this would perfectly align with the multilateral strategies laid out in Russia’s newly unveiled Foreign Policy Concept of 2016.

Given that Russia, China, Iran, Pakistan, and Turkey all share a common ground in the SCO, they’re each interested to varying degrees in abiding by the group’s charter “to jointly counteract terrorism, separatism and extremism in all their manifestations”, which again returns to the reason why each respective delegation plans to visit Moscow in the first place.

Turkey’s U-Turn on EU: From New Hope of Membership to Standstill
Under Russia’s diplomatic leadership through the two Moscow Summits, the common SCO connection between all sides could thus lead to these multipolar Great Powers more closely coordinating their anti-terrorist military activities and conflict resolution diplomacy in the Syrian and Afghan theaters, thereby spearheading a holistic and collective Eurasian approach to countering the US’ Hybrid Wars.

Moreover, since the SCO has been evolving over the past years into also becoming an economic integrational platform, it’s possible for the deep level of trust that their multilateral cooperation yields to become the basis for a broader and more robust partnership between all sides modelled off of what Russia and Pakistan are presently pursuing.

If the SCO-affiliated countries use their collective military and diplomatic gains in Syria and Afghanistan as a catalyst for accelerating their post-conflict strategic integration with one another, then it’s entirely possible for this to eventually translate into the creation of a crisscrossing network of New Silk Road connectivity between Istanbul and Beijing and Moscow and Islamabad, with the upcoming two summits being seen in hindsight as the geostrategic masterstrokes which brought together the most crucial pivotal players of the emerging Multipolar World Order.