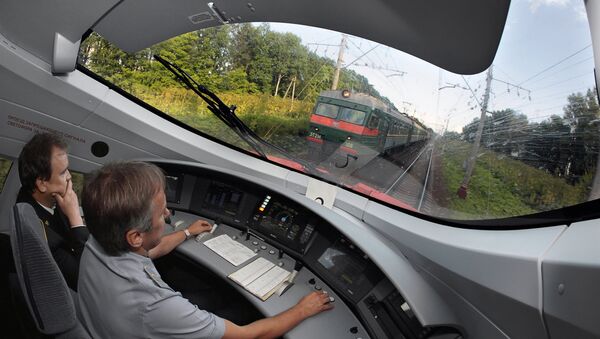 © Sputnik / Ruslan Krivobok
/
Go to the mediabank
Subscribe
International
India
Africa
Russia is set to begin construction of a high-speed railway in 2017 making it possible to link European and Chinese high-speed systems, Russian Railways First Vice President Alexander Misharin said, reporting on the implementation of a program to build fast-train and high-speed routes in Russia at the concluding 2016 meeting of the corporate board.

The RZD press service quotes Misharin as saying: "The creation of high-speed railway in Russia is the first step in linking Europe's Euro Carex system and the China Railway Corp system, with speeds of up to 300 and 250 kph, respectively. Construction of the Moscow-Kazan-Yekaterinburg high-speed railway with an extension toward Beijing and the net development toward the European Union assume significant importance."

According to Misharin, RZD and High-Speed Railways, the RZD subsidiary that will manage the construction of high-speed rail in Russia, as well as a Russian-Chinese consortium and French technical consultants, have finished designing the Moscow-Nizhny Novgorod route.