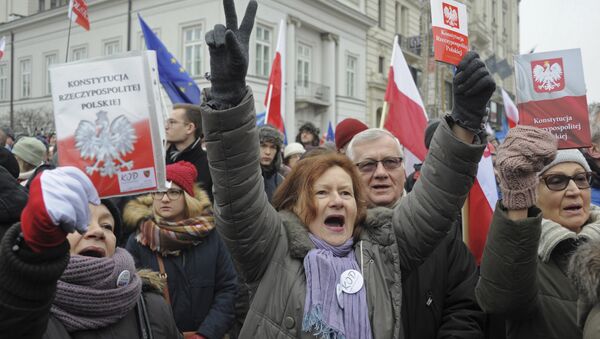 Polish Ruling Party Leader to Meet With Journalists Amid Mass Protests in Warsaw
WARSAW (Sputnik) — On Saturday, several thousand people took part in protests near the presidential palace in Warsaw in response to the Polish ruling Law and Justice (PiS) party decision to limit media presence in the Polish parliament. The new media restrictions allow only a limited number of TV stations in Poland to record parliamentary sessions starting next year. A number of Polish news organizations responded by boycotting any coverage of parliamentary activities on Friday.

"I would like to repeat that no one ever wanted to restrict journalists' access to the political events taking place in the parliament," Karczewski said following almost two-hour long meeting.

On Friday, opposition Civic Platform member Michal Szczerbaan was removed from the lower house after criticizing the PiS for restrictions on media presence in the parliament. Opposition lawmakers then disrupted the session and the house speaker adjourned before convening members of parliament in a different room, where several laws were passed without electronic voting systems.

Opposition refused to recognize the session and protesters gathered near the Sejm. Clashes with police followed early on Saturday as PiS members, including party leader, left the building while escorted by security.