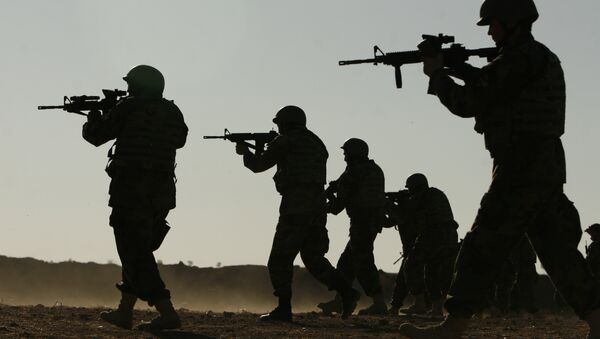 British military specialist have arrived in the Middle East to train rebels to fight Daesh (also known as ISIS and ISIL), but how much of a difference would this make in the fight against terrorism?

Specialist UK soldiers have arrived in Iraq, joining the 500 already deployed to the region. The arrival of the soldiers has been announced, as the UK hosts a conference of defence ministers from countries in the coalition fighting Daesh.

​The Iraqi prime minister announced a campaign on October 17 to reclaim the key Daesh stronghold, with mixed forces of Iraqi army, Kurdish militias and Sunni Arab tribesmen advancing from south, east and north.

Twenty trained military soldiers have been sent by the UK and according to government officials they are most likely special forces soldiers.

However, the question being asked is whether this will make any difference in the fight against terrorism in the Middle East and globally.

Dr. David Lowe, a counter-terrorism expert from Liverpool John Moores University in the UK, told Sputnik that these rebel fighters do need training in terms of logistics and military tactics. However, complete elimination of Daesh may be harder to achieve.

​"Yes territorially we might be able to eliminate them but you won't remove the group's (Daesh) ideology and this could be compounded by returning fighters to the UK and they might try and create some attacks," Dr Lowe told Sputnik.

However, the introduction of these special force soldiers may trigger new attacks by Daesh.

"I don't think you can upset Daesh anymore, if you look at it when it was at the peak of its power, they are a very violent group. Anyone who has a difference to their opinion, they attack. Look at what they have done to Sunni and Shia Muslims. It reminds you of 1940s Nazi Germany, the only difference was the uniform."

The humanitarian crisis in Aleppo has brought to the forefront the desperate situation in Syria and the need for immediate help to save innocent civilians. Inviting the British military to Iraq could also be a tactic deployed in Syria.

"You have to look at the diplomatic and political situation, what happened in Aleppo is tragic and likewise in Iraq, we are looking at non-combatants, women and children, who have been suffering," Dr. Lowe told Sputnik.

"In Iraq the difference is that the Prime Minister has invited different groups to fight, so this is needed to help train inexperienced combatants and rebel fighters," Dr Lowe added.