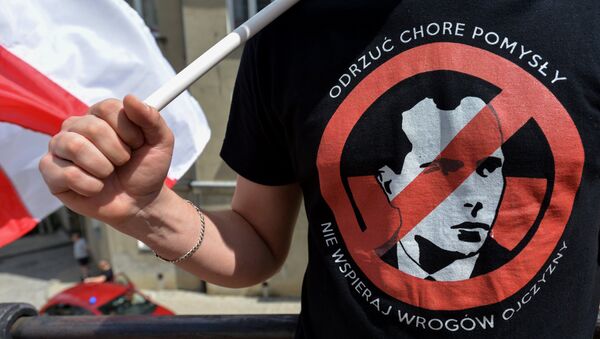 © Sputnik / Alexey Vitvitsky
/
Go to the photo bank
Subscribe
The Polish Parliament is meeting on Friday to discuss a proposed ban on the propaganda of Communist and other totalitarian ideologies. As a result, a large number of Ukrainian monuments in Poland attributed to the symbols of totalitarianism could be dismantled.

If passed, the proposed law will most certainly invite angry backlash from Kiev, but the atrocities committed by members of the UNA-UNSO and UPA organizations of Ukrainian ultranationalists in Volyn and other Polish territories, the genocide of local Jews and other ethnic minorities remain very much alive in the memory of millions of Poles.

As for the proposed dismantling of illegally erected monuments commemorating the “heroic feats” of these Nazi lickspittles, this is something the residents of Kresy, the eastern Polish borderlands that were handed over to Ukraine after the end of WWII, have been demanding for quite some time now.

Nationalism Disguised as Patriotism: Stepan Bandera's Legacy Looms Over Poland
Meanwhile, any Polish criticism of Ukrainian nationalists is invariably met with bitter resentment by Kiev, even though the majority of Poles hold no grudge towards Ukraine. Over 30,000 Ukrainians currently study in Poland and at least a million more have found jobs in the Polish Republic.

The crimes perpetrated in Poland by the Ukrainian Rebel Army, or UNA, led by Stepan Bandera, that collaborated with Nazis and fought against the Red Army during the Second World War, have left a gaping rift between the two countries that can only be closed when Ukraine officially admits them, apologizes and turns the page.

However, judging from what is going on in Ukraine, this will hardly happen any time soon.

The ultranationalist ideology of Stepan Bandera, who is now a national hero in Ukraine, poses a serious threat to Ukraine itself complicating its search for a political and national identity. And it will hardly bring Ukraine to the European Union, which was the main goal of the 2014 Maidan coup d'etat.

This ideology also poses a threat to Ukraine’s neighbors as it was extremely intolerant of ethnic minorities, including Poles living in what was then western Ukraine.

The essence of this inhuman ideology has not changed a bit over the past 80 years.

Nazi Collaborator Bandera, RIght Sector Head Feature on Ukrainian Notebooks
Between February 1943 and February 1944, units of the Ukrainian Insurgent Army (UPA) killed an estimated 100,000 Poles in Volyn and eastern Galicia, former Polish territories now in western Ukraine. It remains one of the darkest chapters in the two nations' history.

After the defeat of German Nazism in 1945, members of the UNA and the paramilitary UPA units continued their struggle against the Soviet Union.

000000
Popular comments
The poles have a little catching up to what nationalism is concerned. So who cares, after a couple of years this eruption of repressed politics will have subsided. Merkel is doing much more damage with her total lack of nationalism as far as Germany and also the EU is concerned. nationalism is nothig more than "branding", it is essential for the development of any culture or country. You have to be careful with the dosage, at some point everything becomes a poison.