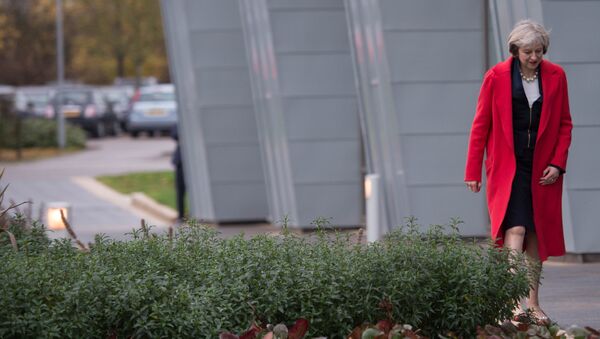 European Union leaders devoted just twenty minutes to discussing Brexit at a late night meeting in Brussels. An uninvited Theresa May was left in the dark to fly back to London early. Meanwhile, reports have emerged that the UK will be billed US$62 billion by the EU for leaving the union.

"Don't leave me this way. I don't understand how I'm at your command," so go the lyrics of the Communards' 80's classic.

May Signals Need for Preliminary Deal on Post-Brexit Status of Britons in EU
For UK Prime Minister Theresa May, a self-described 80's music aficionado, her latest encounter with her fellow EU leaders must have been particularly pointed.

The 1980s saw a growing divide between Britain and Brussels, when the socialist Jacques Delors at the helm of the European Commission steered the EU towards a more federal Europe and a single currency.

The relationship has now gone full circle, with Mrs. May aiming to make the divide permanently severed.

On Thursday 15th December, at a late night meeting in Brussels, the other leaders of the 27 other member states minimized the Brexit debate to a paltry 20 minutes.

They were supposed to discuss the issue over a three-course dinner, to which Mrs. May had not been invited. However, when debates on other topics, like Ukraine, dragged on, the discussion was redacted to the less than half an hour blip.

If Theresa May felt ignored at the #EUSummit, she now has some idea of how the 48+% of us feel about her Govt on #Brexit

President of the European Council, Donald Tusk, described it as a "short informal meeting" to finalize the EU's Brexit processes.

A side-lined May had expected to comment on the debate, but embarrassingly, with so little to talk on, she cancelled her planned press conference in the early hours of Friday morning.

One EU source told the Guardian that on learning that the EU talks was running more than three hours late, Mrs. May excused herself to allow the summit to continue without her.

"I'd better leave," Mrs. May reportedly said. "It was very nice, sympa…"

Footage from the summit showing May standing awkwardly alone, while other EU officials interact around her has gone viral on social media.

Remember that video of #TheresaMay looking lonely at the #EUSummit today?

We improved it a little… pic.twitter.com/8j8wgI62Px

With little to show for her time spent among the continental club, she flew back to London.

Political analysts are interpreting the underwhelming encounter as a sign of the May's increasing isolation in the continental club. More to the point, the brevity of the debate on Brexit indicates the fact that the impending divorce of the UK and EU is not currently top of the agenda for other EU member states.

May is making no friends and influencing no one in the EU.
How can she seriously expect to get "best Brexit deal for Britain"?

A huge stumbling block is that Theresa May's government has yet to initiate Article 50 proceedings — the official bureaucratic process that will start negotiations.

The prime minister has said she will trigger Article 50 in March 2017, ahead of the next European Parliament elections.

There have also been unconfirmed reports that suggest that the cost of the UK extricating itself from the EU could run as high as $62 billion, including covering EU budget payments, pension liabilities for staff and other commitments. Downing Street has said that such payments are still up for negotiation.

In the meantime, the UK can expect to make little progress with their European partners.