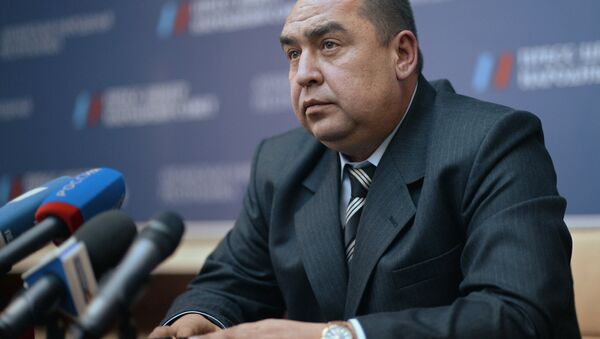 © Sputnik / Valeriy Melnikov
/
Go to the photo bank
Subscribe
Ten foreigners have been granted passports by the self-proclaimed Lugansk People’s Republic (LPR) in Ukraine’s southeast, according to LPR Interior Ministry.

"In total, according to the decree of LPR leader Igor Plotnitsky, the documents were given to ten people: citizens of Georgia, Israel, India, Italy, Palestine, Turkey and Sri-Lanka," the representative said.

This is not the first time that foreign nationals receive LPR passports. In September, US MMA fighter Jeff Monson became the first American citizen to accept the self-proclaimed republic’s passport.

In February 2015, a peace agreement was signed between Ukraine’s conflicting sides in the Belarusian capital, Minsk. The deal stipulates a full ceasefire, a weapons withdrawal from the line of contact in eastern Ukraine, an all-for-all prisoner exchange and constitutional reforms, which would give a special status to the self-proclaimed Donetsk and Lugansk people’s republics in the southeast. Kiev has been reluctant to implement the Minsk accords.