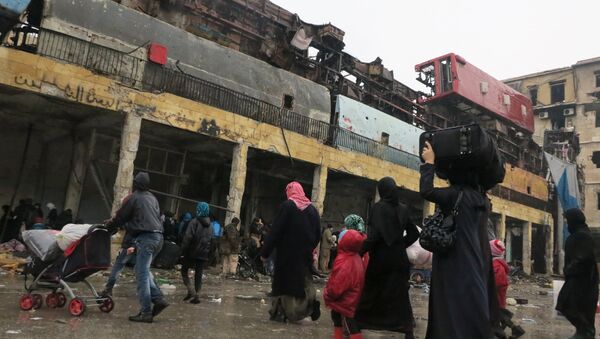 © Sputnik / Michael Alaeddin
/
Go to the photo bank
Subscribe
Western media outlets are bursting with horrifying news of Syrian troops and their allies murdering civilians in Aleppo, but the exact sources of these reports remain unclear. Radio Sputnik discussed the issue with Danny Makki, media analyst and co-founder of the Syrian youth in Britain movement.

“There have been reports in the Western press about hundreds of civilians being killed in Aleppo, but there has not been one photo or video or any documented evidence [that such killings of civilians are actually taking place], so it’s just a propaganda war,” Danny Makki said.

He added that the victory won by the Syrian government in Aleppo is a strategic victory, the most important in this war thus far.

“It has exposed the Western support for the rebels, who had held the city hostage for the last four years. There are some 250,000 civilians in East Aleppo and around 80,000 have already left the city under Syrian government control.”

Saudi Media Waging Information War, Spreading Fake Images of Horror in Aleppo
When asked where these sources of information about these alleged mass killings of civilians actually come from, Danny Makki said that if such mass-scale killings of civilians really had happened, it would have been very hard to hide those acts, much less to defend them.

“But the fact is that there have been no such things and reliance on information about people being killed and raped is simply wrong. Looking at the pictures coming out of Aleppo over the past 24 hours one can see that there has been a lack of substance of photography, of imagery of the actual events happening in Syria, despite the fact that the so-called journalists, who are acting in support of the terrorists, are taking several interviews each day but fail to provide a single bit of evidence of such killings of civilians [by government forces],” Makki noted.

He added that what really matters now is that Aleppo has been liberated despite all Western attempts to divide Syrians since the start of the crisis.

“[The West] actually encouraged the uprising against the Syrian government which, helped by its allies and Russia, has been going from victory to victory now.”

“It’s the gradual beginning of the end for the rebels in Syria.”

When asked why the celebrations in the western part of Aleppo haven’t been covered by Western media, Danny Makki said that there had been some coverage by the BBC, ITV and CNN, but that was not enough.

“They know what’s happening in Aleppo, but the lack of journalists, Western journalists, there at the moment, is predetermined. It means that they don’t want to show people in the West what the Syrian government is really doing there, helping evacuate the city residents, the people the West  have failed to support during these past four years of conflict.”

“It’s a clear case of realpolitik, where one side is supporting terrorists, al-Qaeda and other extremist groups while the other is genuinely defending the sovereignty of the state,” Danny Makki emphasized.

The latest story about “bodies in the streets” of Aleppo and mass murders came from the UN Human Rights spokesman Rupert Colville. At Tuesday’s news briefing, Colville said pro-government forces in eastern Aleppo have been killing people, including women and children, on the spot, in their homes and in the street.

Russian Military Prepares to Evacuate Remaining Militants From East Aleppo
However, he did not elaborate where this information came from, citing unspecified reports that were, as he said himself, hard to verify.

On Wednesday, Russia’s Foreign Minister Sergei Lavrov dismissed such claims. He said that none of the independent humanitarian organizations on the ground were confirming the reported atrocities. Since the Syrian Army began gaining ground in the city, reports of its alleged war crimes intensified.