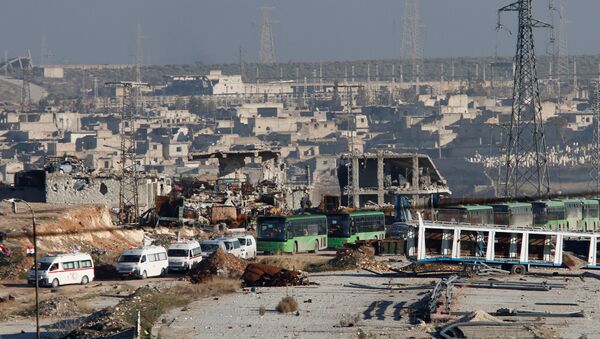 "We are concerned that British officials use unconfirmed data, part of which is fabricated by terrorists. Murders and atrocities committed by terrorists are presented as those by the Syrian army, which fights for the liberation of its people from terror," Yakovenko said.

MSM 'Turning Truth Upside Down' Covering the Liberation of Aleppo
He added that Moscow calls on the British government to use only confirmed data not to misinform UK citizens.

The Russian ambassador told during a meeting with UK lawmakers that Moscow is surprised that the liberation of the Syrians in Aleppo is presented by British media as a "tragedy of the Syrian people."

"We are surprised that the liberation of Aleppo by the Syrian army, the liberation of hundreds of thousands of Syrians, women and children from terrorists, the delivery of humanitarian aid to them by Russia is presented by British authorities as a tragedy of Syrian people. We don't understand the logic behind letting all these people, thousands of whom were killed by terrorists, remain their [terrorists'] hostages. Russia's stance is that it is unacceptable to use civilians as human shields."

"When analyzing British official statements and discussions in the Parliament, we see that the main argument used against Russia's actions in Syria is that it supports and strengthens the 'Assad regime.' Thus, anything that does not contribute to a regime change in Syria, is not in UK interests. This is why Russia's and Syrian army's joint fight against terrorism is subjected to indiscriminate criticism. And the humanitarian situation is used as a pretext. We cannot agree with this approach and would like to see the UK on the right side of history," the ambassador said.

Civilians of Aleppo 'Welcome Syrian Soldiers as Heroes' (VIDEO, PHOTOS)
He also said that while British authorities are constantly voicing concern about the "humanitarian catastrophe" in Syria, there was no UK aid to residents of Aleppo, especially dozens of thousands of people evacuated from the eastern part of the city.

Yakovenko also said that the UK continues policy aimed at Syrian President Bashar Assad's ousting instead of participating in the Syrian crisis settlement.

"An analysis of the British stance on Syria suggests that London continues to pursue the policy of ousting President Bashar Assad instead of resolving the conflict. This is continuing the policy aimed at regime change in the Middle East. Western adventures became the main reason of the influx of migrants to Europe, since they had led to a protracted conflict along with the destruction of a statehood in a number of countries."

Yakovenko also criticized that crimes committed by al-Nusra Front terrorists were not covered in official documents of the UN and the OSCE. "It is necessary to give an honest assessment of the atrocities by terrorists, especially since the vast majority of them are mercenaries, foreigners, and they do not care about the future of Syria," he noted.

He pointed out that Russia condemns the policy of indirect support of extremist organizations.

Why MSM Continue to Spread Myths About 'Syrian Army's Atrocities in Aleppo'
"We condemn indirect support carried out through regional players of the so-called 'moderate opposition,' who are in fact extremists in alliance with terrorists. The position of Russia: it is necessary to ensure that any aid including humanitarian does not get into the hands of terrorists," Yakovenko said.

He noted that it was well-known what the consequences of UK actions in Libya were and added that Russia believed Syrians must decide for themselves who would lead their country.

"We don't want Britain to repeat its mistakes: aggression in Iraq and Libya. If a united front against terrorism was created as Russian President Vladimir Putin proposed, the situation in the Middile East and other parts of the world would have been different," he concluded.