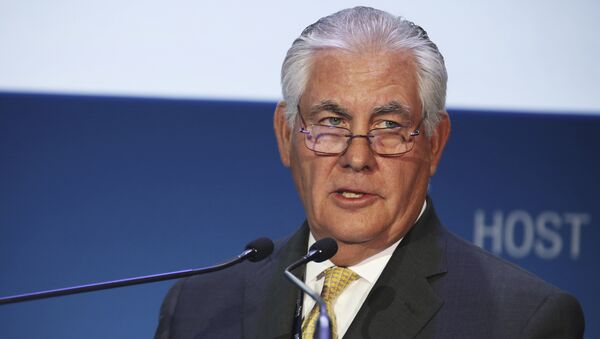 Tillerson Vital to Trump’s Goal of Restoring US-Russian Relations
WASHINGTON (Sputnik) — Tillerson, nominated by Trump for US secretary of state, will retire and hand over his position as Chairman and CEO of Exxon Mobil to the corporation's current president Darren Woods on January 1, the company said in a press release on Wednesday.

"We can expect to have someone in charge of US foreign policy who sees the world through the lens of an owner of the world's biggest oil company, Exxon Mobil," energy analyst and DeSmogBlog Research Fellow Steve Horn said. "Energy imperialism… will be a key part of State Department policy."

Horn predicted that Tillerson would boost the power of the Bureau of Energy Resources (BER) at the State Department that was created by former US secretary of state Hillary Clinton.

"It [the State Department] will have a person at the top of the ticket with a particular expertise in energy and the global energy markets," Horn said.

Horn also suggested that Tillerson would seek to include Russia in a State Department-driven program to promote shale gas extraction around the world.

"I also expect a resurgence of the Global Shale Gas Initiative/Unconventional Gas Technical Engagement Program, a creation of the Hillary Clinton State Department as well, but with a new country in the fold: Russia… the drumbeat is very loud and hard to miss," he said.

However, Horn warned that Tillerson’s efforts to improve relations with Russia might be offset by increasing tensions with Iran.

"I perhaps see more hostile relations toward Iran looming, which will be part of a larger Sunni-Shiite proxy war which is already ongoing in the region, as seen in the crisis unfolding in Syria," Horn said.

Any renewed US confrontation with Iran, which is predominantly Shiite, would contradict Trump’s promise to defeat Daesh, which is Sunni, he added.

"But you can bet your bottom dollar energy, oil [and] gas will be at the center of all of this geopolitical maneuvering, as has always been the case. Even more so, now, under Secretary of State-nominee Rex Tillerson," Horn argued.

Buckley also expressed his support for Trump’s choice of retired US Marine General James "Mad Dog" Mattis as his national security advisor and believes the president-elect’s National Security Council is "shaping up nicely."

Tillerson could also play a key role in Trump’s efforts to persuade Russian President Vladimir Putin to join the US in pressuring Iran, the Israeli Debka File suggested on Wednesday.