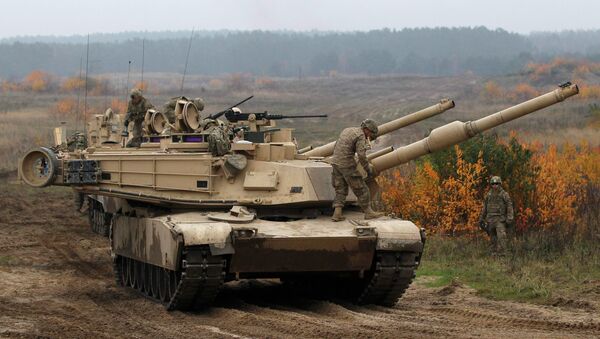 © REUTERS / Kacper Pempel
Subscribe
International
India
Africa
The US-based Defense Security Cooperation Agency (DSCA) reported that Kuwait is seeking to make $1.7 billion worth of upgrades to its aging fleet of tanks. On December 12, the US State Department notified Congress of the possible Foreign Military Sale (FMS) to provide Kuwait capital to upgrade over 200 M1A2 Abrams tanks.

Kuwait is seeking to increase the ability of tank crews to respond to infantry threats while remaining safe within their armored vehicle.

Some of the upgrades include the Common Remotely Operated Weapons Station II, the purchase of over 1,000 night vision goggles, AN/VRC-92E SINCGARS radios, as well as thermal management and cooling systems. Included in the sale would be 480 7.62mm M240 machine guns and 240.50 caliber M2A1 machine guns, to be mounted on the vehicles.

The DSCA stated, "This proposed sale will contribute to the foreign policy and national security of the United States by helping to improve the security of a friendly country which has been and continues to be an important force for political stability and economic progress in the Middle East."

"The proposed sale of this equipment and support will not alter the basic military balance in the region," asserted the weapons-sale committee.

Kuwait’s tank upgrades are only one of several FMS deals to be considered by the US Congress in the next 30 days, including TOW missiles for Morocco, Chinook helicopters for Saudi Arabia, and Apache helicopters for the United Arab Emirates.

Congress recently blocked a $1.15 billion request from Riyadh for M1A2 tanks, amid an increasing civilian death toll in Yemen.

In the first two and half months of 2017’s fiscal year, the combined total of DSCA’s notifications are just under $44 billion. Possible sales in December alone come to about $9.6 billion.