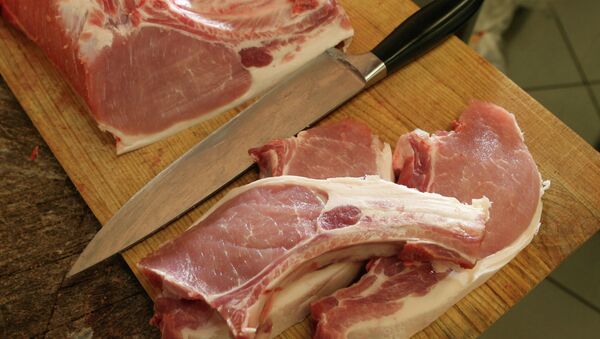 © Sputnik / Igor Zarembo
/
Go to the photo bank
Subscribe
Japan issued a veterinary certificate for the supplies of Russian meat products to the Japanese market, according to Russia's agricultural watchdog Rosselkhoznadzor.

"On December 13, 2016, a veterinary certificate for the supplies of Russian cloven-hoofed animals’ meat heat treated products to Japan was signed," Rosselkhoznadzor said in a statement.

According to the watchdog, the signing of the certificate summed up the procedures, which started in 2013, aimed at granting two Russian companies Miratorg Zapad and Ratimir an admission to the Japanese market.

On Wednesday, Russian agricultural holding Miratorg reportedly passed certification and got an opportunity to supply heat treated pork and beef to Japan’s market.

In mid-November, representatives of the Russian-Japanese working group reached an agreement on a possible access of beef to the domestic markets of the two countries. In late November, it was reported that Japan planned to continue inspection of the Russian enterprises interested in export of beef to the Japanese market and intended to conduct the same work regarding supplies of Russian poultry meat.

Russian President Vladimir Putin is currently in Japan with a working visit, which is widely seen as a breakthrough in the Russian-Japanese relations, taking into account that it had been postponed since 2014. Putin is set to discuss with Japan's Prime Minister Shinzo Abe bilateral issues, in particular, signing a peace treaty, as well as acute international problems.