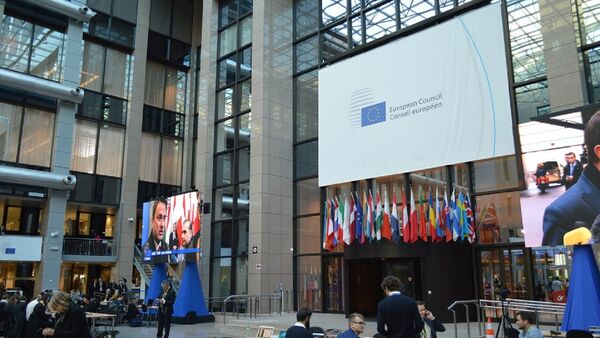 © Sputnik / Dennis Bolotsky
Subscribe
Leaders of the 28 EU member-states have agreed to extend sanctions against Russia for six additional months. The future of the predominantly financial restrictions beyond the middle of 2017 is uncertain, however, as more European politicians are pushing for a “reset” in relations with Moscow.

Possible Sanctions Over Syria Situation Not Discussed at EU Summit, Tusk Says
The extension of the EU sanctions against Russia, primarily over alleged actions in Ukraine, seemed inevitable, as the European Council prolonged trade and travel restrictions without additional voting, indicating that the rollover was done on something resembling autopilot.

The Hardliners And Their Opponents

Currently there is no unanimity in Europe over the sanctions against Moscow. While most politicians in Spain, Greece, Austria, Hungary and Italy would like to abolish the restrictive measures, leaders in Germany and France, as well as top figures in some Baltic states, consistently express support for the actions.

Tusk:Decision to prolong sanctions against Russia has been made, EC needed confirmation from Merkel and Hollande as members of Normandy fmt. pic.twitter.com/f8mPOpPmei

​Russia reacted to the EU's unfriendly punitive measures in 2014 by banning many European food imports. As a result, mutual trade between Russian and European companies dropped by over $180 million, between 2013-2015.

Who picked up the tab

Mimicking its allied EU states, Belgium, which hosts EU and NATO headquarters, supported the sanctions, but the popular stance in the country on the restrictive measures is far from unanimous.

According to Aldo Carcaci, Belgian MP for the People's Party, restrictive measures against Russia are unfair. He told Sputnik that in his country at least two industries are affected by the sanction war.

"Fruit and vegetable growers, as well as our national production companies, like those that produce hunting weapons, suffered the most. Belgian exports of hunting rifles to Russia is an industry with an annual sales value of 5 million euros."

In 2015 the European Commission, attempting to mitigate some of the collateral economic damage caused by Moscow's retaliation to the sanctions, adopted a special aid package for EU farmers worth some €500 million. Many farmers in Europe, especially those unable to find alternative markets for their goods, are still experiencing difficulties.

Many European leaders appear to be firm in continuing to pressure Russia, but policies can change quickly. Some politicians are losing support at home, as opposition parties like the Dutch Party of Freedom and France's National Front win the hearts and minds of increasing numbers of voters. Many observe that 2016 has been a difficult year for the EU, with Britain voting to leave the union, and with James Cameron resigning over Brexit. Other initiatives, like the EU-Ukraine association agreement, are met with pessimism by countries like the Netherlands. And finally, there's "the Trump factor." The US President-elect has been signaling that he is willing to have a conversation with Russian President Vladimir Putin, and America's European allies may follow suit.

Carcaci observes that his party was the only political faction in Belgium to openly support Trump's candidacy. The US President-elect has been reported to owe his victory to middle class voters, and Carcaci's party addresses a similar audience:

"Today we see that the EU is detached from reality, from what's happening on the ground, from the daily concerns of European citizens: economic growth, employment, finance, and other great difficulties. Today we, as "populists," want these people's voices to be heard. Donald Trump was elected as the US leader because he listened to middle class — to people whose concerns are being ignored by traditional political parties. So it's very important for us."

The EU's restrictive financial measures target entire sectors of the Russian economy, including banking, energy and defense. Currently some 149 Russian citizens are banned from entering Europe.

The current set of sanctions expires at the end of January, 2017. A formal decision to prolong them until July 31, 2017, will be adopted within the next few days by the EU Committee of Permanent Representatives.