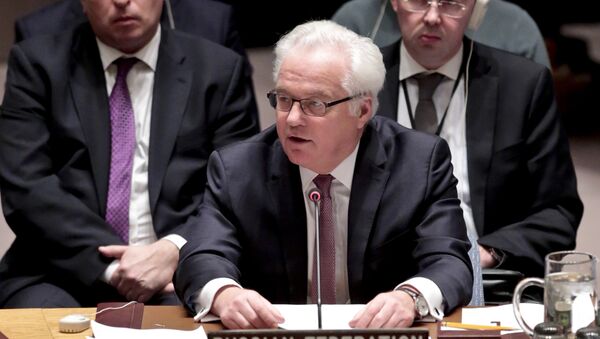 © AP Photo / Bebeto Matthews
Subscribe
International
India
Africa
Russia is waiting for responses from the international community on its proposal to draft a convention to counter chemical and biological terrorism, Russian Permanent Representative to the UN Vitaly Churkin told the Security Council (SC) on Thursday.

US Coalition Strikes Destroy Daesh Chemical Weapons Facility in Syria’s Raqqa
UNITED NATIONS (Sputnik) — Churkin claimed that the Russian initiative was gaining more support. He also noted that reports of terrorists gaining access to technologies and infrastructure to create chemical weapons indicates that the threat has increasingly become a large-scale and trans-border issue.

"At the disarmament conference in Geneva, Russia came up with an initiative to draft an international convention on fighting acts of chemical and biological terrorism," Churkin said. "We call upon our partners, who haven’t made their position in this respect clear yet, to once again study the Russian proposal carefully and respond positively."

Speaking before Churkin, Deputy Secretary-General Jan Eliasson said the world today is “over armed” and “the one sure way to prevent terrorists from acquiring weapons of mass destruction — is their complete elimination."

The UN Security Council held a meeting on weapons of mass destruction (WMD) Thursday where it unanimously adopted resolution 1540 aimed at preventing WMD from getting into the hands of non-state actors.