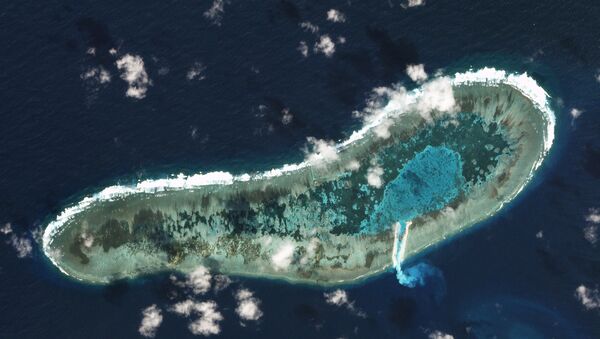 China’s buildup of military infrastructure in the Spratly islands, reported Wednesday by a US think tank citing satellite images, was later defended by officials in Beijing as a part of “necessary” defense measures.

"If someone makes a show of force at your front door, would you not ready your slingshot?" the Chinese Defense Ministry said in a statement Thursday.

The maritime region, providing access to key trade ports in Hong Kong, Ho Chi Minh City, Singapore and the Philippines must not fall under the control of a single regional player, US Admiral Harry Harris recently said in a speech. The US "will not allow" China’s projection of military might to bully others in the "shared domain," he said. The US has pushed for the South China Sea to remain under the auspices of freedom of navigation rules, and has sent patrol ships within China’s recently-claimed boundaries on four occasions.

When asked about a recent Asia Maritime Transparency Initiative (AMTI) report showing a buildup of anti-aircraft and anti-missile systems, Chinese foreign ministry official Geng Shuang told Reuters he "did not understand" the controversy. The construction of missile facilities and territorial defense posts on Chinese land is "completely normal," he noted. If such activities are considered efforts to project military strength, he countered, "then what is the sailing of fleets in the South China Sea," referring to US military vessels conducting freedom of navigation patrols.

Regional players remain wary of calling the actions bonafide militarization. Philippines’ Defense Minister Delfin Lorenzana claimed his country was still verifying reports, and Australian Foreign Minister Julie Bishop referred to the situation as only "possible" militarization, according to a statement. Still, if the AMTI report is accurate, it would pose a "big concern" to the Philippines and the international community at large, Lorenzana said.

"It would mean that the Chinese are militarizing the area," he said, "which is not good."