Atrocities With No Proof? UN Staff Was Not Allowed in Syria 'Since Crisis Began' 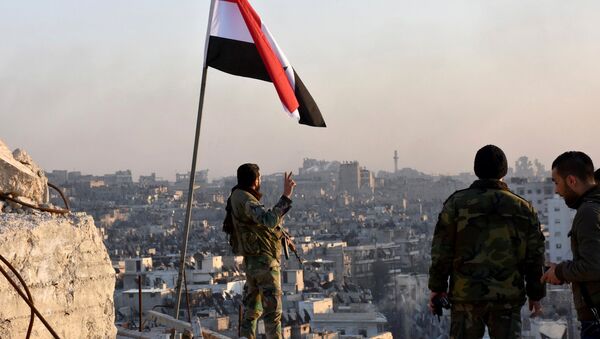 As western media outlets are bursting with horrifying news of Syrian troops and their allies killing civilians in Aleppo, the exact sources of these reports remain unclear. On Wednesday, Russia’s Foreign Minister Sergei Lavrov dismissed such reports. Radio Sputnik spoke with Rupert Colville, Spokesman for the UN High Commissioner for Human Rights.

“These are sources we have worked with for a long time, so we were able to test the quality of the information. They have been given information to the detriment of the fighters on both sides. They are very well aware that putting out propaganda or distortion is counterproductive,” Colville said.

He further said that the United Nations take very seriously the claims they are making and they do believe that the information was credible.

However, he said that he cannot “guarantee it absolutely” because the situation in eastern Aleppo is “extremely chaotic and difficult.”

Talking about whether there are any first-hand accounts of atrocities committed by the Syrian forces against civilians coming right from the UN staff on the ground in Syria, Colville said, “No, UN staff has never been allowed into Syria by the Syrian government since the crisis began.”

Silence After Chaos: A Look Into Aleppo's Liberated District (VIDEO, PHOTOS)
“We have been asking, as obviously that would be the best solution because right now as there is a great fear amongst the civilians in Eastern Aleppo and in other parts of Syria,” Colville said.

Talking about if the UN has been able to talk to any civilians that have been evacuated from rebel held areas in Syria, the spokesman said, “No, as I said we are not present in Aleppo at all.”

He further said that they have never been allowed to go into the country and that makes him wonder why there is this hindrance.

Looking at the Syrian peace talks, Colville said that the Human Rights office believes it to be essential.

“We need the fighting, killings and tortures to stop. We want the displacement to stop. The story of Syria over the past five years is one of utter horror, misery and destruction at such a massive scale is an utter shame on the entire international community that it has got to this point,” the spokesperson said.