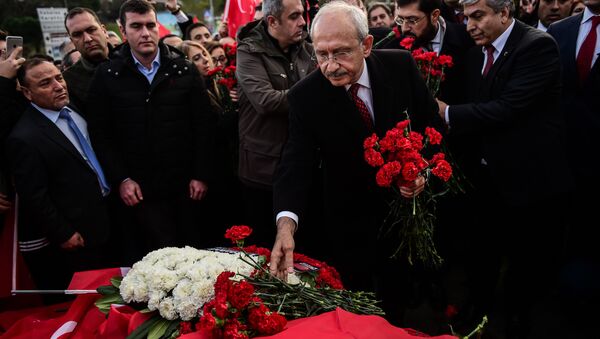 "The issue of terrorism is above politics,” Turkish Prime Minister Binali Yildirim said after the meeting on Wednesday, as quoted by Daily Sabah.

The meeting took place in the wake of the twin blast in Istanbul on December 11, which killed at least 44 people, mostly police officers, and injured about 150 people. The country's authorities believe that the Kurdistan Workers’ Party (PKK) could be behind the twin blast.

PKK is outlawed in Turkey as a terrorist organization. A ceasefire between Turkey and Kurdish militants collapsed in July 2015, prompting the Turkish authorities to launch a military operation in the Kurdish-dominated southeastern regions.

On Monday, Turkish media reported that the police arrested 118 activists of the pro-Kurdish Peoples' Democratic Party (HDP) as part of the anti-terrorist operation in the wake of the Istanbul attacks.