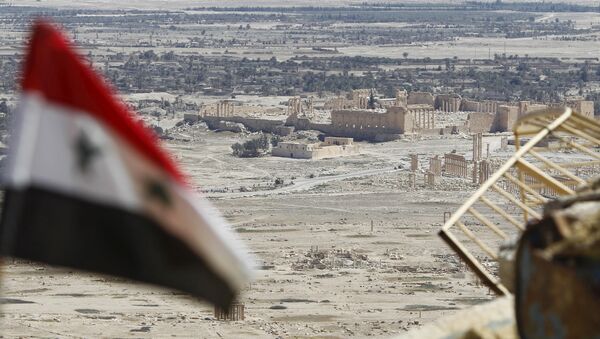 Syrian Army Sending Reinforcements to Military Airfield Near Palmyra - Reports
According to the diplomat, it raises the question of how large groups of Daesh militants managed to move from Iraqi Mosul to the area of Palmyra.

Zanganeh suggested that the suspension of a Kurdish and US-led operation in Syrian Raqqa also played in the hands of the terrorists.

"When Daesh and al-Nusra Front militants are attacked and close to being defeated they try to relocate to other areas. After Mosul was blocked large parts of Aleppo province near the city of Al-Bab were retaken by the Syrian Army and its allies as a result of fierce clashes. In an attempt to breach the entrapment, Daesh militants and other terrorists launched an offensive on Palmyra," Zanganeh told Sputnik.

According to him, a group of over 4,000 militants "could not have moved from Mosul to Syria undetected on radars by the US combat aviation and stayed uncaught."

"The suspension of the Raqqa operation by a US-led coalition was planned to let militants redeploy from Mosul to Palmyra. The entire operation was made up and carried out in coordination with the US and some regional players," Zanganeh suggested.

US Military Official: Washington ‘Riding to Raqqa’ With 200 More Troops
In November, the Kurdish-led Syrian Democratic Forces (SDF) announced Operation Wrath of Euphrates to reclaim the city of Raqqa from the militants. The city was captured in 2013 and since then served as the de facto capital of the Daesh caliphate in Syrian and Iraq.

He added that the coalition has suspended the active phase of the offensive until spring of next year. Daesh took advantage of the pause and redeployed military equipment and nearly 4,000 militants to Deir ez-Zor and Raqqa.

Liberation of Aleppo Paves the Way for Syrian Army's 'Offensive on Idlib, Raqqa'
Maj. Gen. Konashenkov stressed that the recent attack on Palmyra proves that terrorists must not have opportunities for such pauses which they use to regroup and replenish forces.

In turn, Syrian President Bashar Assad said that the timing of the attack on Palmyra proves that it is related to the situation in Aleppo.

"This is the response to what is happening in Aleppo, an advancement of the Syrian Army and they wanted to make this, let’s say to underline the victory in Aleppo, and at the same time to distract the Syrian army from Aleppo to make it move toward Palmyra and start the advancement but of course we did," Assad said in an interview with RT.

According to journalist Mikhail Sheinkman, the suspension of the Raqqa operation and the following attack on Palmyra add to a series of events throughout the Syrian war that can hardly be viewed simply as random events.

He also noted that the news about new attacks on Palmyra has been mostly ignored by Western media as well as by Western leaders.

"This is war, and everything can happen. But there are so many occurrences in this story that they look like a chain of logically related events. US aircraft, once again by mistake, bombed Iraqi forces right at the area where they were to prevent Daesh militants from leaving to Syria form Mosul. Moreover, the US-led coalition and its allies took a pause in combat actions in Raqqa and near Deir ez-Zor. As a result, we are seeing some 5,000 Deash militants coming to Palmyra," Sheinkman wrote in an article for Radio Sputnik.

Positive Trend Exists in Syrian Military Advances in Aleppo - Kremlin
After Palmyra was liberated in March, many experts warned that control over the city could be maintained only if all terrorists were defeated across Syria. However, currently the Syrian Army  does not have sufficient forces to protect Palmyra from terrorists.

"In fact, the attack on Palmyra is an attempt to take revenge for [the liberation] of Aleppo," the article read.

The Syrian Army declared victory in Aleppo, the country’s second-largest city, on Monday. Over the recent months, Aleppo was a battleground for intense clashes between government forces and militant groups blocked in the city.