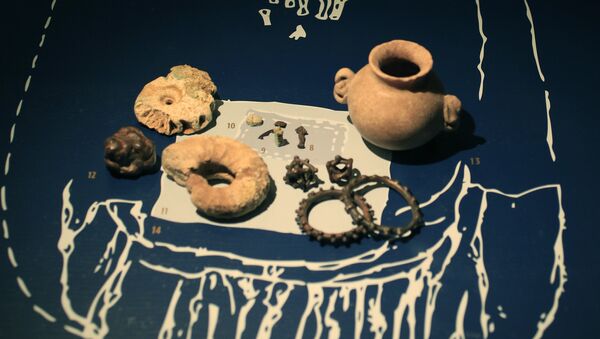 © AP Photo / Peter Dejong
Subscribe
International
India
Africa
Crimea's Deputy Prime Minister Georgy Muradov criticized Wednesday the decision of an Amsterdam court that a collection of the Scythian gold which was on loan from Crimea's museums to the Netherlands should return to Ukraine.

MOSCOW (Sputnik) – In early February 2014, the collection of the Scythian gold, provided by five museums, one in Kiev and four in Crimea, opened at the Allard Pierson Museum, the archaeological museum of the University of Amsterdam. Earlier in the day, the Dutch court decided that the collection of Scythian gold should return to Ukraine, not to Crimea where it was kept before the peninsula’s reunification with Russia.

"I had no opportunity to examine the decision yet, it is necessary to read it carefully. But in any case, if there is any negative [aspect], this decision is politicized, it is not legal, because the agreements were concluded between museums. And the exhibits must be returned to those museums, where they were taken from," Muradov told RIA Novosti.

What You Need to Know About Scythian Gold Dispute Between Russia, Ukraine
Muradov stressed that any legal decisions may be subjected to the appeals, which Crimea was working on.

The exhibition includes some 2,000 items such as a Scythian scabbard, a ceremonial helmet, precious gems and numerous gold artifacts.

Crimea rejoined Russia in 2014, after an overwhelming majority of voters supported the historic reunification in a referendum.