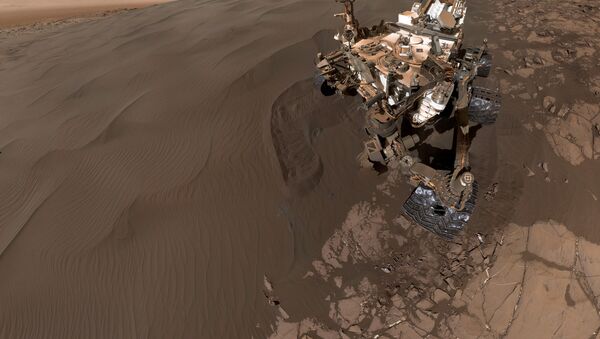 NASA’s Curiosity rover has found boron on the surface of Mars. This chemical element is crucially important for life as it is a key part of many protein molecules and is essential for DNA synthesis.

Scientists reported about their discovery during the annual meeting of the American Geophysical Union in San Francisco on December 14.

"No prior mission to Mars has found boron," said Patrick Gasda, a researcher at the US Department of Energy's Los Alamos National Laboratory in New Mexico.

Mission to Mars: Did India Make a Huge Mistake?

"If the boron that we found in calcium sulfate mineral veins on Mars is similar to what we see on Earth, it would indicate that the groundwater of ancient Mars that formed these veins would have been 0-60 degrees Celsius and neutral-to-alkaline pH," Gasda noted.The temperature, pH, and dissolved mineral content of the groundwater could make it habitable.

In recent years, scientists managed to reproduce many of the key stages for the origination of life on Earth. While geologists say boron was too scarce on early Earth to support any widespread creation of RNA, it was seemingly more abundant on early Mars, leading xenobiologist Steve Benner assumed.

One sign of its presence on the red planet is that at least one meteorite has delivered some Martian boron to Earth. After studying Martian meteorites in 2013, Benner assumed that in its atmosphere there was enough oxygen to acerbate these elements and dissolve them in water in its atmosphere.

However, according to Gasda, no traces of boron or molybdenum have previously been found on Mars, which cast a shadow on Benner’s theory. Now researchers have managed to confirm at least part of the theory as boron was found in soil samples on the Martian mountain called Mount Sharp.

When Curiosity used its Chemistry and Camera (ChemCam) to blast one of the rocks with an infrared beam they boron compounds. It was very unusual and made the researches stop the rover and study the stones using other instruments.

It turned out that the rock consisted mainly of gypsum with layers of boron salts inside. Later on, when Curiosity continued its way to the top of Mount Sharp, more stones even richer in boron were found.

Researches presume that the boron salts could have been formed in two ways: either as the result of huge amounts of water evaporating from the surface like it happens on Earth or as the result of chemical interaction between Martian soil and floods of water passing over it.

“There is so much variability in the composition at different elevations, we've hit a jackpot,” said John Grotzinger, a geologist at the California Institute of Technology in Pasadena.

The study showed that water was involved in the circulation of substances on Mars which emboldens theories about life on the Red Planet.

“A sedimentary basin such as this is a chemical reactor. Elements get rearranged. New minerals form and old ones dissolve. Electrons get redistributed. On Earth, these reactions support life,”' Grotzinger said.

According to the researcher, judging by the thickness of layers of rocks containing boron and other elements, such processes could have continued on Mars for hundreds of millions of years. After boron was found on Mars, our chances to find there any traces of life increased, Grotzinger concluded.