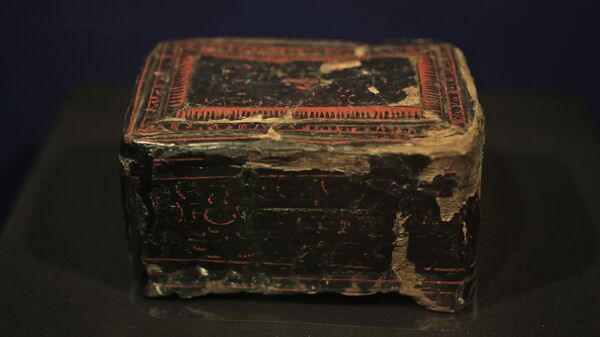 © AP Photo / Peter Dejong
Subscribe
International
India
Africa
Russian lawmaker Natalia Poklonskaya, who represents Crimea in the Russian parliament, on Wednesday promised to do her best to return the collection of the Scythian gold from Crimea's museums back to the peninsula.

Crimean Museums Confirm Plans to Appeal Decision to Send Scythian Gold To Kiev
MOSCOW (Sputnik) — The collection of the Scythian gold which is a part of the "Crimea. Gold and Secrets of the Black Sea" exhibition was brought to the Allard Pierson Museum in Amsterdam in early February 2014. The collection was provided by five museums, one in Kiev and four in Crimea. The dispute about the exhibition arose after Crimea reunified with Russia following a 2014 referendum. Earlier on Wednesday, the District Court of Amsterdam ruled that the Scythian gold artifacts should return to Kiev.

"I am sure that representatives of the Crimean museums will appeal against the decision [of the court]. I would like to wish them success… I will exert every effort to help our Crimean representatives in preparation of all necessary documents to appeal this illegal and unfair decision," Poklonskaya, who is one of the lawmakers representing Crimea in Russia's Federal Assembly, told reporters.

She added that she would do everything "possible and impossible" to return the collection of gold back to Crimea.

According to Poklonskaya, the ruling by a Dutch court to give Crimea' s Scythian gold to Ukraine is an attempt to seize a property worth 1.5 million euros ($1.6 million).

"Frankly speaking, the decision of the court could be treated as a way to illegally seize a property, which is worth of a huge sum — 1.5 million euros. I suggest that the Crimean authorities appeal against the decision and strive for a legal verdict," Poklonskaya, who is one of the lawmakers representing Crimea in the Russian legislative body, said on her Facebook page.

She added that the decision of the court in regard to Scythian gold showed that western states do not use such terms as "law," "objectivity" and "lawfulness," when considering cases related to Crimea.