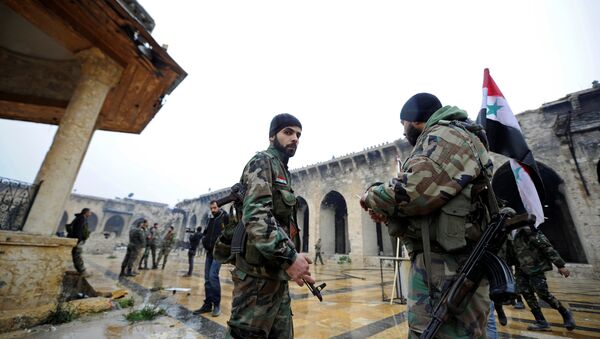 © REUTERS / Omar Sanadiki
Subscribe
The Syrian government is denying the "US way" of dealing with terrorism through mass killings, and is instead trying to end the conflict by giving normal life back to citizens, Syrian President Bashar Assad told RT broadcaster in an interview.

MOSCOW (Sputnik) — The fact that some militants may leave the Syrian city of Aleppo with weapons is a disadvantage to the Syrian government, as they could use them in later attacks, but priority is minimizing the civilian casualties by letting the insurgents leave, Bashar Assad stated.

Assad: US Lifting Ban on Arms Supplies to Syrian Rebels Linked to Palmyra Attack
The president said there was a chance for terrorists to change their mind, lay down their arms and join the government.

"When they don't, they can leave with their armaments, with the disadvantage [of being able to carry out future attacks] but this is not our priority, because if you fight them in any other area outside the city, you're going to have less destruction and less civilian casualties."

He added that some of those who gave up terrorism have joined the Syrian army to fight against terrorism.

"So, if you can bring them back to their normal life, to be natural citizens, that's your job as a government. It's not enough to say "we're going to fight terrorists." …. You cannot deal with it on the American way: just killing, just killing! This is not our goal; this is the last option you have. If you can change, this is a good option, and it succeeded."