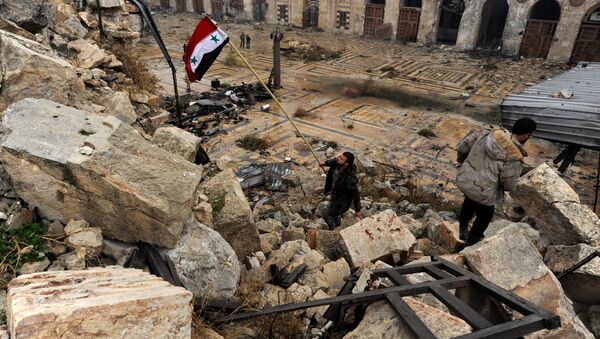 © REUTERS / Omar Sanadiki
Subscribe
International
India
Africa
The liberation of the Syrian city of Aleppo creates an opportunity for government forces to make further advances against terrorists across Syria, said Boris Dolgov, senior research fellow at the Institute for Eastern Studies of the Russian Academy of Sciences.

World
Syrian Army Declares Victory in Aleppo
On Sunday, the Syrian Army officially declared victory in the battle for Aleppo which began more than four years ago. The first clashes in the city broke out on July 19, 2012.

In the last few months, Aleppo has become an important battleground in Syria, engulfed by a conflict between government forces and a number of opposition and extremist groups.

Over the past three weeks, the Syrian Army and militias have freed more than 98 percent of the territory of eastern Aleppo, according to the Russian reconciliation center.

Russian, Turkish Foreign Ministers Discuss Syria's Aleppo
Russia’s Envoy to the United Nations Vitaly Churkin said that an agreement had been reached on the withdrawal of militants from Aleppo.

According to Dolgov, such an agreement could mean that the command of the Syrian Army wants to minimize the number of casualties.

"This move can be regarded as being aimed not to prolong combat actions killing civilians and personnel. This is why the rest of the militants could have such an opportunity [to leave the city]," the expert told RIA Novosti.

"It was reported that American military advisers were in the ranks of the so-called moderate opposition forces in Aleppo. It was also reported that they have left the city or they could leave, but this is not confirmed. But these factors may have been the reason behind this agreement," Dolgov pointed out.

He underscored that the "liberation of Aleppo is a very important achievement by the Syrian Army on a scale of the entire Syrian crisis." 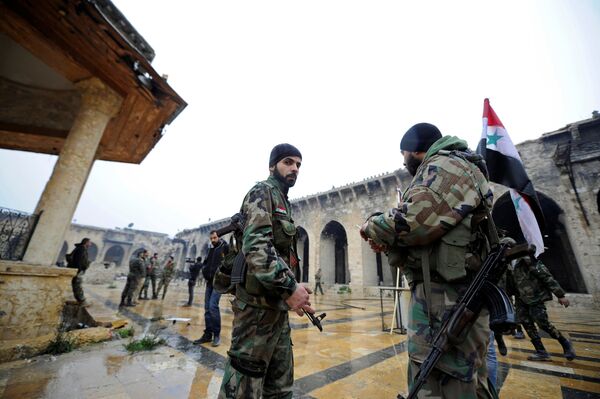 "Despite the fact that Aleppo has been seriously damaged during the war, it is still the country’s second-largest city and the industrial center of Syria. The liberation of Aleppo creates an opportunity for further advances on Idlib where many Islamist groups are concentrated," Dolgov suggested.

Daesh Attacked Palmyra in Response to Syrian Army Advance in Aleppo - Assad
He also said that the liberation of Aleppo as well as further advances by the Syrian Army will contribute to disrupting military support and arms supplies coming to Syrian terrorists "from Turkey."

"The liberation of Aleppo makes the Syrian people confident that the conflict will end and the defeat of terrorism is possible," Dolgov added.

Commenting on the possible developments on the ground, the expert suggested that the Syrian Army will first have to regain control over Palmyra and then, possibly, will plan an offensive on Idlib and Raqqa.

On Monday, Palmyra was captured by Daesh which pushed out the Syrian army and forced it to regroup at an airbase dozens of miles westward from the ancient city. Daesh first seized the city in spring 2015 before being forced out by Syrian government troops with air support from Russian jets in March 2016. They have since made multiple attempts to retake Palmyra culminating in a major assault toward the end of last week.