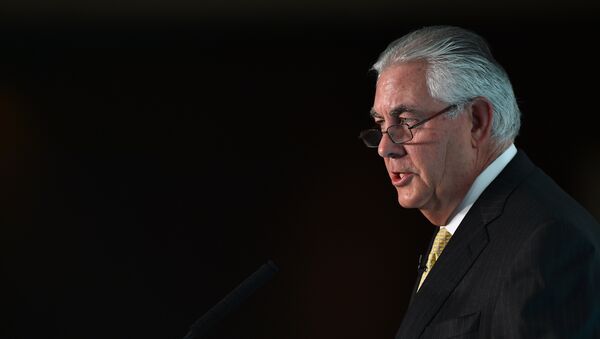 © AFP 2023 / BEN STANSALL
Subscribe
International
India
Africa
Rex Tillerson is well-prepared to serve as US secretary of state and well-versed about international issues, according to Hess Corporation CEO John Hess.

US Oil Industry Rebalances Workforce Amid Low Prices – Hess CEO
WASHINGTON (Sputnik) — Rex Tillerson, President-elect Donald Trump’s nominee to be the next US secretary of state, is well-prepared to serve in that capacity and well-versed about international issues, Hess Corporation CEO John Hess told Sputnik.

"Tillerson is a very capable business executive. He’s got a wealth of experience in the industry," Hess said on Tuesday. "He does his homework, he’s very well-prepared and really knowledgeable about global affairs."

Earlier on Tuesday, Trump officially announced he would nominate Tillerson, chariman and CEO of Exxon Mobile, to be the United States’ next top diplomat.

Tillerson joined Exxon Mobile in 1975 as a production engineer and served as the company’s senior vice president and president before being elected chairman and chief executive in 2006.