Russia to Maintain 3rd Position in Global Gold Mining in 2016 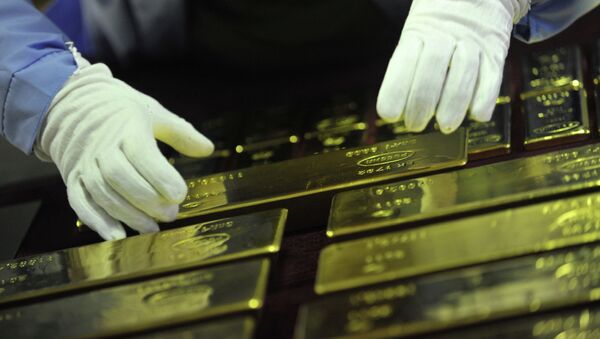 © Sputnik / Pavel Lisitsyn
/
Go to the mediabank
Subscribe
International
India
Africa
The chairman of the Union of Gold Producers of Russia said that Russia will maintain third place in the list of global gold producers after China and Australia in 2016.

Russia's Largest Gold Mine to Be Auctioned on January 26 Starting at $130Mln
MOSCOW (Sputnik) – Russia will maintain third place in the list of global gold producers after China and Australia in 2016, the chairman of the Union of Gold Producers of Russia (UGPR) said Tuesday.

"We will surely maintain the third position in production of gold from mineral raw materials… we predict that Russia will preserve its third place after China and Australia. At the same time we are very close to Australia, which is also partially a raw material producing country," Sergey Kashuba told Vestnik Zolotopromyshlennika, which is part of the Rossiya Segodnya International Information Agency, speaking about the results of year 2016.

He added that Russia could improve its position in the list of gold producers, but needed a leap forward to achieve this goal, because Australia had exerted a lot of efforts to improve the situation in the gold mining sector.

According to Kashuba, Russia could slightly increase its gold output in 2017, if new capacities, for example in country's eastern Irkutsk Region, Kamchatka Territory and Magadan Region, become operational.