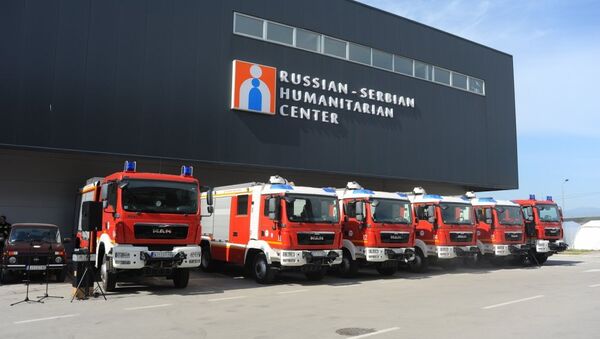 © Photo : mchs.gov.ru
Subscribe
International
India
Africa
Sergey Lavrov said that Brussels has called on Belgrade to close the Russian-Serbian Humanitarian Center in the southern Serbian city of Nis, if the Balkan nation wants to join the European Union.

Russia-Serbia Trade Turnover Likely to Rise in 2017 - Russian Envoy to Serbia
BELGRADE (Sputnik) – Brussels has called on Belgrade to close the Russian-Serbian Humanitarian Center in the southern Serbian city of Nis, if the Balkan nation wants to join the European Union, Russian Foreign Minister Sergey Lavrov told Sputnik in an interview.

"The EU thinks the Russian-Serbian Humanitarian Center in Nis is a nest of spies, a threat to the security in Europe… We know that Brussels calls on Serbia to close the center if Serbia wants to enter the European Union and demands Serbia to behave in the way like the Montenegrin leader, who has just betrayed all his commitments, all his promises, who has betrayed Russia despite the fact that Russia has not done anything bad to him," Lavrov said.

He added that such a strategy of the European Union to be "friends against someone" was not shared by Moscow, which considered that friendship should be established "not against, but with someone."

The Russian-Serbian Humanitarian Center was set up on the basis of a cooperation agreement between the Russian and Serbian governments on April 25, 2012. It is tasked with tackling emergency situations, including firefighting, providing humanitarian assistance to people affected by disasters, implementing joint projects and programs, training programs on emergency situation prevention, testing and demonstrating rescue technologies, according to the organization’s website.