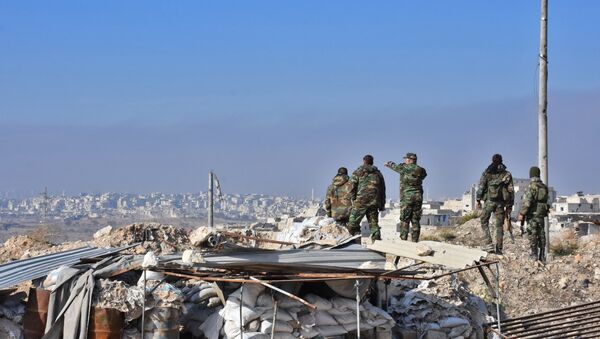 © AFP 2021 / GEORGE OURFALIAN
Subscribe
There were no "opposition", "humanitarian organizations" or "human rights watchdogs" in Eastern Aleppo, instead there was a total terror at the side of militants, Russian Defense Ministry spokesman Maj. Gen. Igor Konashenkov said on Tuesday.

"In Eastern Aleppo, there were no 'opposition', 'local councils', or so-cherished by London and other capitals, 'humanitarian' NGOs with 'western values' such as the 'White Helmets', 'medical' associations or 'human rights defenders'," he said.

Konashenkov noted that, according to locals, there were only hunger and total terror exerted by militants as punishment for any attempts to express discontent or leave the enclave.

Russian combat engineers "have not found a single operational hospital or school that had been used in militant-held areas for their designated purposes," he added.

Over the past three weeks, the Syrian army and militias have freed more than 98 percent of the territory of eastern Aleppo, which had been held by terrorists since 2012, and have liberated over 100,000 residents of the city.