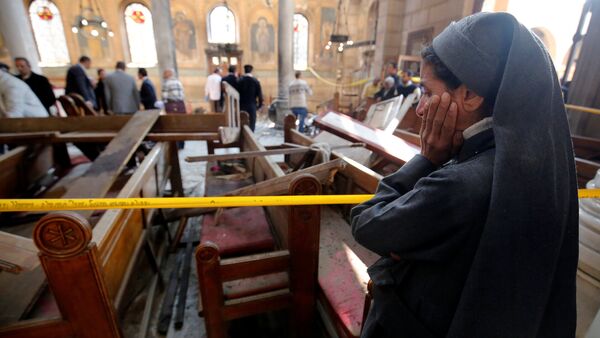 Damascus Condemns 'Coward' Terror Attack on Cairo's Coptic Cathedral
CAIRO (Sputnik) — A strong blast hit the Coptic Christian cathedral complex in Cairo on Sunday, killing 25 people and wounding 49. This is the worst attack on Coptic Christian community since 2011, when a suicide bomber killed 23 people outside a church in Alexandria.

On Monday, Egyptian President Abdel Fattah Sisi said that the deadly attack in a Coptic cathedral complex in Cairo was staged by a 22-year-old suicide bomber, wearing a suicide vest. The president said four people — three men and a woman — had been detained in connection with the attack, while police were searching for two more suspects.

Earlier on Tuesday, the Egyptian Ministry of Interior said it suspected members of the Muslim Brotherhood who fled to Qatar of involvement in the terror attack.

Another explosion took place in Cairo on December 9, killing at least six police officers and injuring six other people. A source said that a terrorist group affiliated with Daesh jihadist organization might have been behind the deadly explosion.