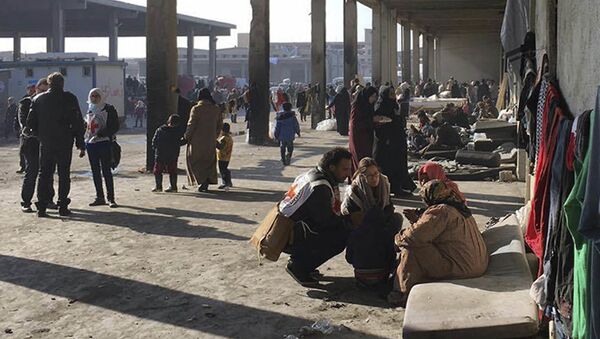 The Syrian army has declared victory in the war-torn city of Aleppo after ousting militants from most of their remaining bastions of resistance. Speaking to Sputnik, eyewitnesses and freelance journalists spoke of threats by militants to beat or kill civilians who might try and flee the besieged eastern portion of the city.

On Monday night, Syrians began celebrating the liberation of Aleppo, as government forces continued the effort to mop up the few remaining pockets of militant resistance. Syrian President Bashar Assad confirmed that the importance of the Syrian army's victory cannot be overestimated, saying last week that triumph in the battle for Syria's second city would be a "huge step" toward ending the crisis in the country.

Speaking to Sputnik Arabic about suspected crimes against civilians committed by the militants, one Aleppo resident confirmed that "most inhabitants of eastern Aleppo are saying that the terrorists threatened to kill or cripple them if they tried to escape territories under their control." The eyewitness added that he personally witnessed militants viciously beat civilians trying to escape to the western portion of the city.

Over the past month, as the Syrian army came close to total victory, an estimated 130,000 civilians that had been trapped in its eastern portion began flooding out en masse, fear of their captors unable to hold them back.

A pro-government activist told Sputnik Arabic that the people coming out of eastern Aleppo are completely exhausted. Most of the civilians were women, children and the elderly, he said, adding that the government is doing everything it can to help them rest and recover from their ordeal.

How Aleppo Residents Are Reacting to Their City’s Liberation (PHOTO, VIDEO)
Speaking to Radio Sputnik, Alaa Ebrahim, a freelance Syrian journalist who returned to Aleppo on Sunday and has since managed to speak with numerous civilians, and even militants who surrendered to the Syrian army, explained that the situation in the city is now "extremely complicated."

Ebrahim explained for example that "there have been reports that some of the rebels have confiscated some of these civilians' ID papers, and as a result, these civilians are reluctant to leave, in fear of being detained by the Syrian government."

Eastern Aleppo Was Engulfed by Total Terror, No "Opposition or Watchdogs" in It
The journalist said that the Syrian government has established makeshift shelters for many of the 130,000 civilians who evacuated from the city on the city's outskirts over the past three weeks, with many others now staying with relatives in the government-administered portions of Aleppo.

In general, however, the journalist said that he "heard many accounts of people suffering because the ongoing fighting…suffering because most of the aid that went into eastern Aleppo in recent months had been taken by the fighters, and then distributed only to [their] families." 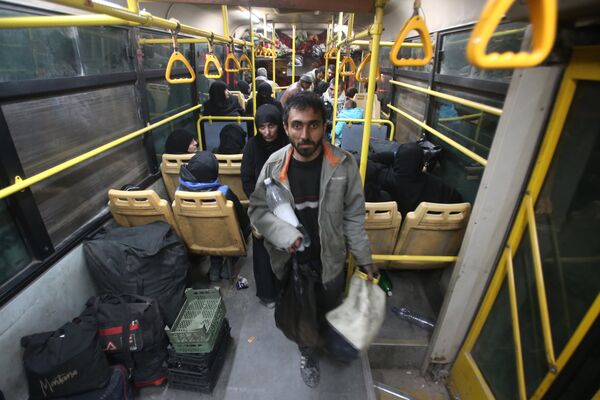 Syrian residents of the Old City of Aleppo stand in a bus at a crossing point during their evacuation to a distinct government-controlled area of the city early on December 7, 2016
© AFP 2022 / Youssef KARWASHAN

"The civilians who had nothing to do with the [militants] did not get access to any aid as a result," Ebrahim stressed. "I have seen many cases of starvation, many cases of abuse –many cases of people being exploited because they had no money, no access to any services in eastern Aleppo. After they crossed to the other side, they were able to actually try and restore their lives in one way or another."

Asked about whether the civilians he had spoken to could confirm allegations made by Western governments and media that the Syria and Russia were engaged in atrocities in Aleppo, Ebrahim said that he had actually "asked these civilians about these atrocities" specifically, including reports of executions, abuse and detention. 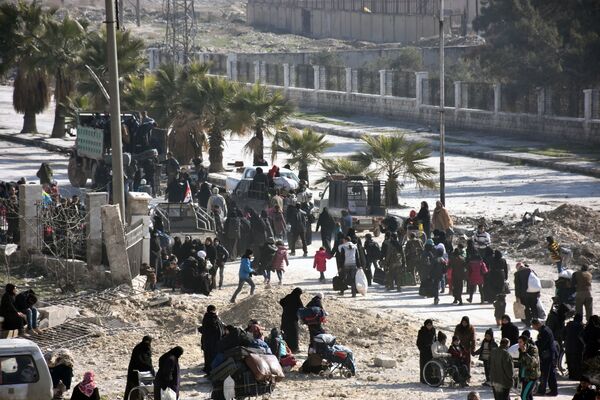 "Many of the people I spoke with said that they did not have any clue about these incidents; they did not witness anything that would remotely prove these reports," he emphasized.

Bulgarian Arms Found at al-Nusra Front Depot in Eastern Aleppo
"Actually, I interviewed several families who were able to stay in their houses even as the Syrian army advanced through their areas and pushed the rebels out, Ebrahim noted. "The residents I spoke with told me that many of the rebel fighters and their families, many of the activists who had been promoting the cause of the opposition and working against the Syrian government – they had fears that they would be prosecuted, detained, or perhaps executed.  But up until now, I haven't seen any documented case of such a thing happening.

"Bearing in mind that many people are saying that this could happen, or would happen, and the opposition saying that it is happening, there is absolutely no proof on the ground that this is actually taking place," the journalist concluded.

With the battle for eastern Aleppo coming to a close, elements of the Syrian army are now planning to redeploy to begin liberating militant-held settlements to the west of the city. A military source told Sputnik Arabic that the army has begun planning to capture numerous settlements in the western portion of Aleppo province, including Dar Aza, Jabal Kabtan and Tel al-Karama, and the town of al-Atareb. The source added that the army must first complete the liberation of two residential blocks in the city of Aleppo proper – Sukkari and Salah ad-Din, both of which are still in militant hands.

Remaining Aleppo Militants Ask Syrian Army to Let Them Leave for Idlib
The source also confirmed that locals have been approaching army personnel and asking them to liquidate the terrorists remaining entrenched in civilian areas, complaining that they have been brutalized by them.

Ultimately, Ebrahim noted that the victory in Aleppo gives Damascus "a decisive upper hand in fighting across the country. The country could head from here into allocating large forces to other frontlines across the country, and substantial gains could be made in upcoming days because of the victory that the Syrian government is about to achieve in Aleppo."