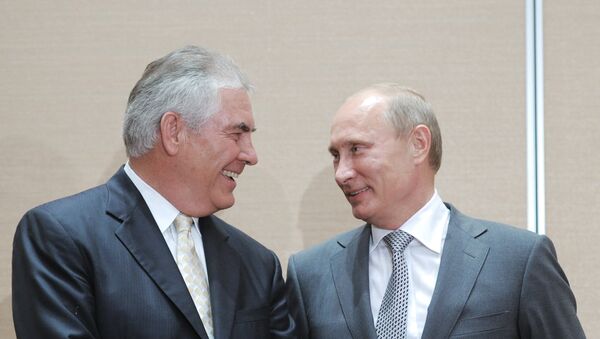 Donald Trump's pick for Secretary of State also has the trust of Russian leader Vladimir Putin and has the ability to repair relations between the two countries.

According to US media reports, ExxonMobil chief executive Rex Tillerson is the President-elect's pick for Secretary of State.

In an interview with Fox News on Sunday Trump didn't disclose his choice, but he called Tillerson "a world class player," who is "much more than a business executive."

"To me, a great advantage is that he knows many of the players, and he knows them well. He does massive deals in Russia — for the company, not for himself," Trump said.

Tillerson was born in Texas in 1952 and joined Exxon as a production engineer in 1975. The company became ExxonMobil in 1999 after a merger.

Tillerson soon rose to management positions and in 1995 became head of Exxon's operations in Thailand and Yemen.

In 1998 he became vice-president of Exxon Ventures in the Commonwealth of Independent Countries, and president of Exxon Neftegas Limited, taking responsibility for the company's holdings in Russia and the Caspian Sea.

Tillerson has worked closely with Russian companies such as Rosneft, which in 2011 agreed with Exxon on a joint oil exploration and development project in the Arctic and Siberia.

What Russia Should Expect From Trump Secretary of State Pick Rex Tillerson
Thanks to successful business co-operation, the businessman was awarded Russia's "Order of Friendship" by Russian President Vladimir Putin in 2013, who has himself met Tillerson several times.

In German newspaper Suddeutsche Zeitung, journalist Matthias Kolb wrote that Tillerson is "a man trusted by Trump and Putin."

Noting that Tillerson sits on the board of the Washington-based foreign policy think-tank Center for Strategic and International Studies (CSIS), Kolb says that he is well aware that smoothing relations is a key task of his time in office.

"He has had more interactive time with Vladimir Putin than probably any other American with the exception of Henry Kissinger," CSIS President John Hamre told the Wall Street Journal last week, as Tillotson was one of several candidates interviewed by Trump.

"The closest thing we have to a secretary of state outside government is the CEO of Exxon," Robert McNally, head of the Washington-based energy and geopolitical consulting firm Rapidan Group, said.

Tillerson's appointment will have a bearing on anti-Russian sanctions, first imposed in March 2014 after Crimea's decision to join with Russia following the Maidan coup d'etat.

The sanctions caused Exxon Mobil's project with Rosneft to be put on hold, and Tillerson has argued for them to be lifted. Last year the company estimated that it lost up to $1 billion during the 2014 fiscal year as result of sanctions against Rosneft.

China Already Has 'Plan B' to Cope With Trump's 'Unpredictability'
Tillerson told Exxon's annual shareholder meeting in 2014 that sanctions are an ineffective way to make a political point.

"We don't find them to be effective unless they are very well implemented comprehensively, and that's a very hard thing to do."

"We always encourage the people who are making those decisions to consider the very broad collateral damage of who are they really harming with sanctions," Tillerson said.

In June 2016 Tillerson traveled to the St Petersburg International Economic Forum against the wishes of the US State Department, which had advised US companies not to travel to the forum.

He was asked about the impact of sanctions on his business, and fired the question in the direction of the US authorities.

"It's a question for the government — if there's any U.S. government official who would like to respond…" Tillerson said, to the laughter of the audience.