Obama Out Not With a Bang, But a Whimper 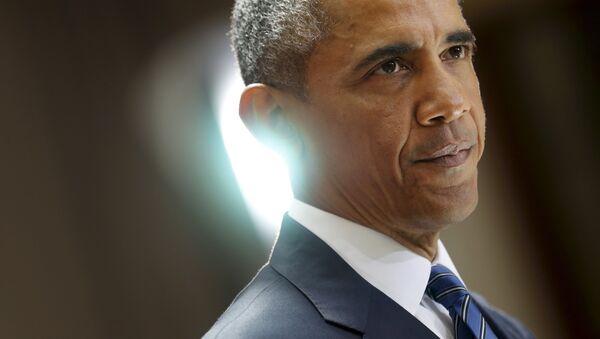 Pepe Escobar
All materials
This is the way the Obama administration ends; not with a bang, but a pathetic whimper.

So Russia Won't Elect the Next POTUS
Queen of War Hillary “We Came, We Saw, He Died” Clinton’s campaign – fully supported by President Obama — spent a whopping $1.2 billion and floundered ignominiously at the US presidential election. So Obama decided that the consolation “prize” is to order the “intelligence community” – a contradiction in terms – to conduct a “full review” of how the evil Russians handed out the Big Prize to Donald Trump.

Queen of War famously insisted throughout the campaign that “17 US intelligence agencies” confirmed Russian hacking of the Podesta emails, then slow-dripped – Chinese torture-style – day after day by WikiLeaks, revealing the slimy inner workings of the DNC. In fact there was no damning 17 intel agencies verdict, just a dodgy comment by further disgraced Director of National Intelligence (DNI) James Clapper offering no evidence whatsoever.

Now Amazon’s Jeff Bezos’ two-bit neocon-infested rag The Washington Post – once upon a time a decent newspaper – piles up, mouthing a sensationalist CIA spin according to which Langley has proof the Russians did maneuver to install their Manchurian, Trumpian candidate.

The intersection of The New McCarthyism and the CIA at the Post couldn’t be more predictable; after all Bezos’ Amazon is a major contractor with the CIA, thus configuring the Post as a key US deep state asset. So welcome to Washington’s alleged newspaper of record regurgitating a US government (USG) blacklist of American and foreign journalists.

One false flag too many

As for the CIA’s intel breakthrough, it amounts to the proverbial “senior US official” reassuring US public opinion that the “consensus view” of the “intelligence community” is that “individuals with connections with the Russian government” provided WikiLeaks with the Podesta emails. WikiLeaks had already debunked this narrative way back in October.

US Senators Urge Congress to Look Into Alleged Russian Meddling in US Elections
Now picture Langley hacks “secretly” briefing senators on Capitol Hill last week, breathlessly reassuring them the Russians did it. Yet even the Post’s shoddy report was forced to acknowledge the proverbial “senior US official” saying “there were minor disagreements…about the agency’s assessment” – as in no solid evidence of “the Kremlin ‘directing’ the identified individuals to pass the Democratic emails to WikiLeaks”.

So this is essentially old debunked news repackaged – with no supporting facts — as a powerful indictment, planted by the CIA on Washington’s alleged paper of record. No wonder the Trump transition team – under White House chief strategist Steve Bannon – duly punctured the CIA strategic balloon; “These are the same people that said Saddam Hussein had weapons of mass destruction.” Case closed. Go back to play with your plastic toys.

Even kindergarten hopefuls know, based on the historical record, that the USG as well as the CIA are specialized in lying non-stop. Sometimes the lies are cumulative, sometimes they contradict each other. Take the sarin gas attack in Ghouta in August 2013 – which propelled the USG to the brink of a renewed Shock and Awe on Syria.

US intel at the time was sure that Jabhat al-Nusra – a.k.a. al-Qaeda in Syria (or “moderate rebels”, according to the Beltway “consensus”) – was capable of producing sarin gas. And yet Obama insisted Bashar al-Assad had done it, thus violating Obama’s silly self-proclaimed red line. Straight out of the neocons-do-Iraq playbook, Obama picked intel to justify what would have been a war on Syria.

News Accuracy Site: US Blamed Wrong Side for Syria Chemical Attack
The fact was that the sarin gas was transferred to al-Nusra under the influence of notorious Bandar Bush – then tasked by the House of Saud to provoke regime change in Damascus by all means necessary. Bandar in fact was even more influential than the CIA; he was directly coordinating the handout of tons of cash and weaponizing to jihadists in Syria, as well as concocting false flags such as Ghouta. And all this after Obama himself had ordered, in early 2012, the CIA rat line through the Turkish-Syrian border of Libyan weapons destined to supply the “moderate rebels”.

The bottom line is that Nobel Peace Prize Obama – lying through his teeth like a lowly neocon – had been on the brink of launching a full-scale war on Syria for a “crime” about which there was no evidence.

And the lies accumulate as the Obama administration’s elaborate Syrian plans flounder in the East Aleppo cauldron. This (in Arabic) is how the “moderate rebels” were expelled – revealing, in parallel, how Damascus profited from inside intel as myriad “rebel” outfits were fighting among themselves. This is about actual facts on the ground – not the relentless USG propaganda/psy ops campaign about evil Russians bombing hospitals.

The whimpering Obama administration is not over yet. Expect more sensational CIA exploits; more demonization of Russia; more weaponizing of “moderate” Syrian “rebels”; and even the odd false flag.