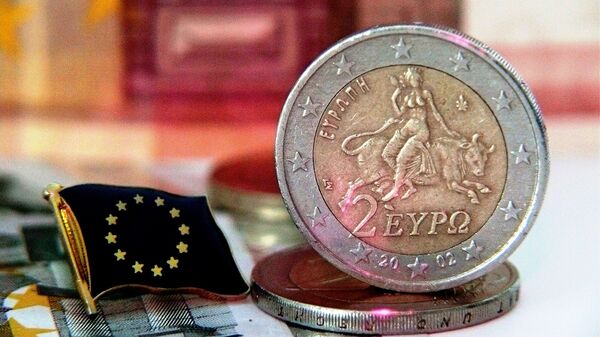 Greek Finance Minister said that Eurozone’s council of finance ministers, the so-called eurogroup, should be more yielding in reaching a compromise with Greece in the second review of the country's reforms under the bailout deal.

EU and IMF Return to Greece for Another Bailout Deal Amid Splits
MOSCOW (Sputnik) – The Eurozone's council of finance ministers, the so-called eurogroup, should be more yielding in reaching a compromise with Greece in the second review of the country's reforms under the bailout deal, Greek Finance Minister Euclid Tsakalotos said Monday.

"The Greek expression is 'put water into wine'. It's not an expression I like, because I wouldn't like my wine watered down, but you know what I mean, to reach an honest compromise," Tsakalotos said, as quoted by Greece's Kathimerini newspaper.

EU ministers met earlier in December to discuss further bailout measures for Greece's heavy debt burden. A set of short-term measures, including longer repayment periods and changing interest rates, were approved by the eurogroup in response to Greece's successful implementation of austerity reforms, but the ministers refused to finalize the second review of the bailout program. The results of the review are key for further tranches of the 86 billion euros ($96 billion) bailout.

The European Union also remained at odds with the International Monetary Fund (IMF), which insisted on broader debt relief measures than those currently on the table.

Delays to finalizing the review may harm Greece's economic recovery, Tsakalotos warned, adding that this could stir discontent with the European establishment.