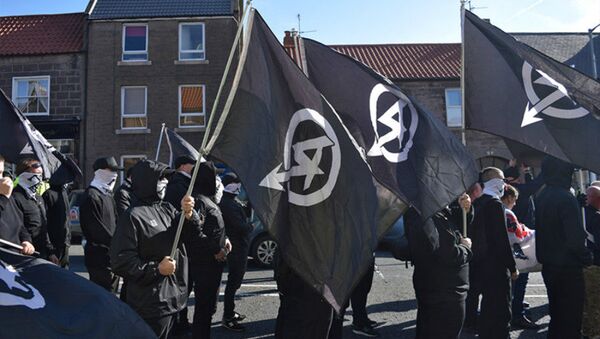 LONDON (Sputnik) — National Action, a UK neo-Nazi group which welcomed the murder of Labour Party lawmaker Joe Cox, is about to be outlawed in the country, UK Home Secretary Amber Rudd said Monday.

"I am clear that the safety and security of our families, communities and country comes first. So today I am taking action to proscribe the neo-Nazi group National Action. This will mean that being a member of, or inviting support for, this organisation will be a criminal offence," Rudd said, as quoted by The Guardian newspaper.

Rudd explained that she would not support National Action as it was "a racist, antisemitic and homophobic organisation", contributing to promotion of hatred and violence.

Official Anti-Semitism Definition by Britain Amid Rise in Anti-Jewish Attacks
Rudd has submitted a respective order to the parliament and the ban is expected to enter into force on Friday.

On November 23, Thomas Mair, found guilty of murdering Cox in June, was praised by National Action, which quoted his words "Death to traitors, freedom for Britain!"

Cox, 41, was stabbed and shot in the street by Mair as she was holding a regular public meeting with constituents in her home town of Birstall in West Yorkshire. The incident occurred on June 16, just several days before the referendum on Brexit.