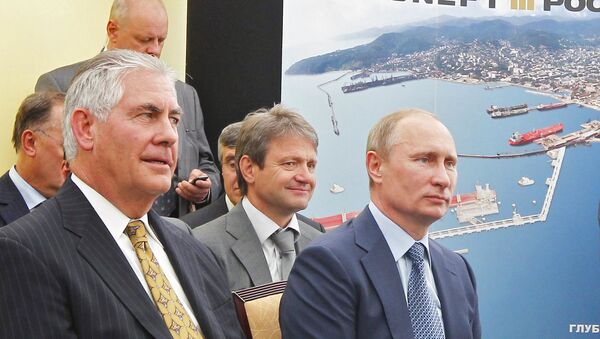 © Sputnik / Michael Klimentyev
/
Go to the mediabank
Subscribe
International
India
Africa
Exxon Mobil CEO Rex Tillerson's relations with world leaders, including an acquaintance with Russian President Vladimir Putin could be an asset to the United States if he is picked as its top diplomat, incoming White House chief of staff Reince Priebus told media on Sunday.

Lavrov Tells Kerry Obama Administration Continues Undermining Russia-US Ties
WASHINGTON (Sputnik) – The chief executive of the US oil and gas giant has been touted as President-elect Donald Trump’s possible nominee for the job. As a senior oil executive he has an extensive record of doing business with Russia’s energy firm Rosneft.

"The fact that he actually has a relationship with people like Vladimir Putin and others across the globe is … something that I think could be a huge advantage to the United States," Priebus told the ABC news channel.

Tillerson is one of the most recent additions to Trump’s list of possible US Secretary of State candidates, alongside Republican’s 2012 presidential nominee Mitt Romney, former CIA director David Petraeus and diplomat Jon Hunstman. A decision will not be announced until at least early next week, Trump’s transition team said.