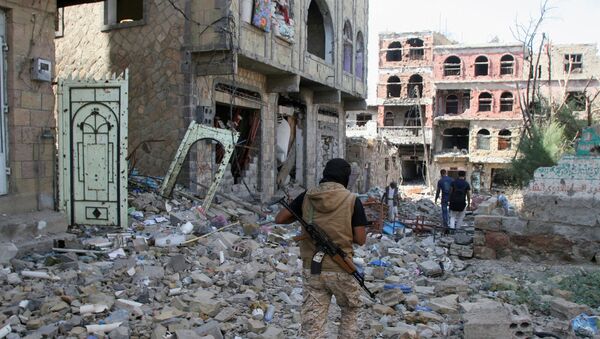 Saudi Aggression Against Yemen Contributed to Development of Daesh, al-Qaeda
In an interview with Sputnik, Brig. Gen. Yahya Mohamed Abdullah Saleh, head of Yemen's public organization Alliance for Progress and Development, expressed hope that Russia, which adds significantly to ensuring security in Syria, will also help solve the Yemen deadlock.

Saleh spoke on the sidelines of the Yemen is an ancient civilization forum in St. Petersburg which was organized by the Alliance for Progress and Development and the Russian-Arab Cultural Center.

The future of Yemen's cultural heritage depends entirely on the current political situation in the Middle East and around the world, according to Saleh. 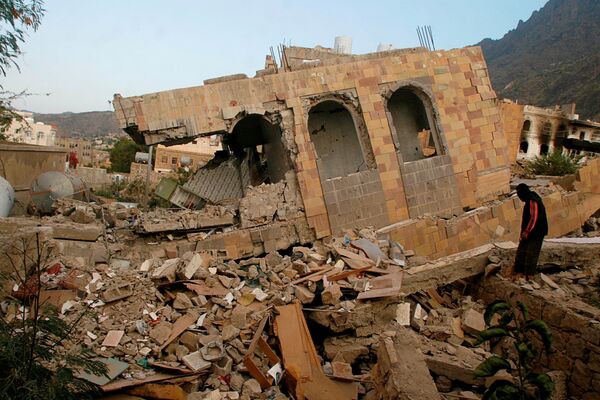 A man stands on the rubble of a house destroyed during recent battles between Houthi fighters and pro-government fighters, on the first day of a 48-hour ceasefire in the southwestern city of Taiz, Yemen.
© REUTERS / Anees Mahyoub

"Saudi Arabia is known to be a country that does not have a rich history. Hence the inferiority complex which prompts Riyadh to take revenge on countries with a rich cultural heritage," Saleh said.

"Terrorist groups steal historical artifacts in Iraq, Syria and Yemen, taking them abroad. In Yemen, Saudi warplanes are bombing monuments which are on the list of the UNESCO World Heritage Sites. Notably, all these objects are located far from the front line," he added.

He said that this was his second visit to Russia, and that he wants tell Russians about what is happening in Yemen, which he claims to be hit by "a real genocide."

"The statistics of international communities only take into account those who were killed due to the bombing. However, scores of people also die from the lack of food and medicine which has resulted from the siege, Saleh said, adding that epidemics have also added to the civilian death toll in Yemen.

"International humanitarian organizations are poorly represented in the country; no one can condemn and punish Saudi Arabia for it being behind genocide in Yemen. Saudi Arabia is at the helm of the Human Rights Committee at the United Nations, which is a clear example of double standards," he pointed out.

In this regard, he voiced confidence that Russia will contribute to breaking the Yemen gridlock.

"Russia plays an important role in resolving the problems in the Middle East, including in Syria. The hope is that Russia will also help solve the conflict in Yemen," he said.

Yemen on Brink of Starvation as Food Supplies Run Out 'Fast'
Speaking at a news conference at Rossiya Segodnya International Information Agency earlier his month, Saleh urged Russia and the international community to put pressure on Saudi Arabia to withdraws troops and stop the bloodshed in Yemen.

Since 2014, Yemen has been engulfed in a military conflict between the government of Abd Rabbuh Mansur Hadi and Houthi fighters, supported by army units loyal to former President Ali Abdullah Saleh.

000000
Popular comments
Don't dare to think about it Russia. Our arms are there making us money, ok ? Sincerely, London 💰